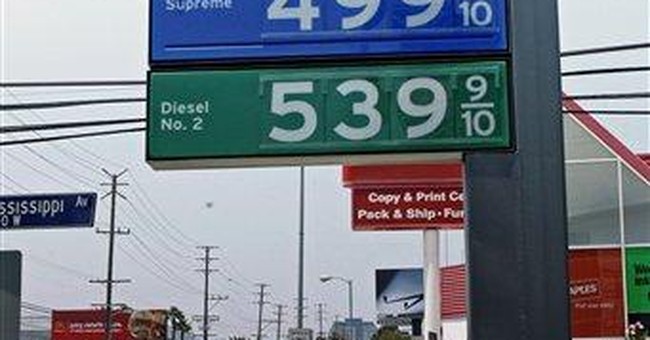 A wag once famously observed that, “Everybody talks about the weather, but nobody does anything about it.” The same has generally been true about gas prices.

At least until this week. The hosing of American consumers (hilariously satirized in a new video by Hollywood icons David and Jerry Zucker at www.NozzleRage.com) and the attendant destruction of our economy has finally gotten the attention of the political elite in Washington and especially the Congress. Legislators are palpably in a panic at the prospect of facing voters in a few months having done nothing meaningful to bring down prices at the pump.

Don’t get me wrong. Even now, even in the face of such “Nozzle Rage,” many on Capitol Hill are more interested in posturing than doing something practical. Some leading figures in both parties continue to play to their respective constituencies. They remain more interested in gaming the system so as to avoid blame and secure advantage in the balloting this November than achieving results for either their constituents or the Nation.

Hence, we will see this week the Democratic leadership pushing for legislation to punish “speculators” who are their latest whipping boys for the current crisis. Is it too cynical to think the previous ones – the companies vilified as “Big Oil” – proved too hard to saddle with a windfall profit tax in a year when those profits are fueling, among other things, campaign contributions? Or maybe it finally dawned on these partisans that we are better off having America’s energy companies use their revenues to explore and recover more oil and gas?

Speaking of drilling, a number of Republicans on and off the Hill are promoting more drilling offshore and in Alaska as THE answer to the present national security as well as economic disaster. While that would certainly be part of a sensible solution over the medium-to-longer-term, there is an unhappy reality: As long as the OPEC cartel can reduce its output to offset any increase we make in domestic supply the net effect on prices could be nil. Obviously, that applies as well to the untapped-but-already-licensed reserves Democrats are trying to use to parry the GOP’s effort to open up new ones in what are depicted as “environmentally sensitive areas.”

At the moment, it is not clear – despite the impetus of the public’s outrage – that partisans on either side of the aisle will be able to muster sufficient majorities to advance their energy gambits. All other things being equal, they seem content to blame the other for inaction and hope that the voters respond in a way that doesn’t simply amount literally to a pox on both their houses.

Fortunately, it appears that this week may also produce an alternative initiative that 1) could make a practical and meaningful difference on the price of gasoline in the relatively near-term and 2) enjoy broad bipartisan support.

Tuesday, Democratic Senators Joe Lieberman and Ken Salazar will join Republican Senators Susan Collins and Sam Brownback in introducing the “Open Fuel Standard Act of 2008.” This legislation would put into law a promise made repeatedly by America’s car manufacturers: to make half their new cars Flexible Fuel Vehicles (FFVs) by 2012. These are cars that can use gasoline, alcohols (ethanol or methanol from whatever source) or some combination. It would require foreign competitors to do the same, then up that percentage to 80% by 2015. Companion bipartisan legislation is expected shortly to be put in play in the House of Representatives.

Senators Lieberman and Collins, the chairman and ranking member respectively of the Senate Homeland Security and Governmental Affairs Committee, will precede a midday press conference unveiling their legislation by holding a hearing on the energy crisis and what might be done about it. While much of the attention will likely be focused on the testimony offered by the estimable T. Boone Pickens – who is currently spending tens of millions of dollars promoting the use of wind power to generate electricity and natural gas to power automobiles, Senators and the public alike would be well-advised to listen attentively to the remarks of another witness: Gal Luft of the Institute for the Analysis of Global Security.

Together with his colleague, Anne Korin, Dr. Luft co-founded the Set America Free Coalition – an extraordinarily broadly based pick-up team of national security experts, energy specialists, environmental groups, scientists, academics, business leaders and other activists. The Coalition has been the driving force behind a blueprint (www.SetAmericaFree.org) for energy security. At the moment, its highest priority is the adoption of an Open Fuel Standard.

Among many riveting facts in Dr. Luft’s testimony – including his documentation of the insidious role the Saudi-led oil cartel, OPEC, is playing in restricting supply and manipulating prices in a manner consistent with the sort of economic warfare against the West promised a decade ago by Al Qaeda’s Osama bin Laden – is this fact: Unless an Open Fuel Standard is adopted swiftly, during the tenure of a Senator elected in 2008, over 100 million new cars will be introduced onto America’s highways the bulk of which can be powered only by gasoline. Given that these cars will be around, on average, for about 17 years, such an arrangement would mean perpetuating the United States’ present vulnerability to OPEC’s strategically dangerous and economically ruinous extortion for nearly two decades to come.

The time has come to do something meaningful about America’s energy freedom. Adopt the Open Fuel Standard. Accept no substitutes.