Eric Trump
|
Posted: Nov 06, 2018 11:25 AM
Share   Tweet
The opinions expressed by columnists are their own and do not necessarily represent the views of Townhall.com. 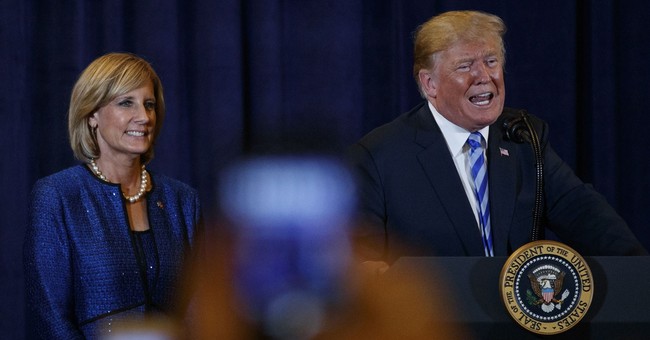 The prosperity of our state is on the line this Tuesday, and it’s up to the people of New York to preserve it at the ballot box.

My father’s policies have unleashed a true economic renaissance across America, and states like New York are reaping the benefits.

In September, the state unemployment rate fell to 4.1 percent — the lowest level in 30 years.

The President’s success at cutting taxes and slashing excessive regulations has had a profound impact on New York, allowing more businesses to invest in growth and hirethousands of new workers.

The rest of the country is also prospering thanks to President Trump's pro-growth agenda. By unleashing America’s entrepreneurial spirit, my father’s policies have produced the lowest national unemployment rate in almost five decades and triggered a sustained period of high GDP growth.

According to the latest report from the Bureau of Labor Statistics, there were 156,562,000 Americans employed in October — the highest number of working Americans in history. With so many people employed and so many new jobs still left to be filled, wages are also rising at a fastest rate in the last 10 years.

Undoubtedly, President Trump’s masterful economic performance presents a problem for the Democrats who are trying to win seats in this year’s midterm elections. Having failed to convince the American people that they deserve credit for my father’s success, the Democrats have resorted to trying to discourage you from voting on Tuesday.

No matter how confident they pretend to be about the inevitability of their so-called “blue wave,” Democrats are well aware that the polls in many key House and Senate races are turning against them. This reality, however, hasn’t stopped the mainstream media from confidently projecting that there will be a Democrat tsunami, even though their predictions in 2016 proved utterly inaccurate.

I was born and raised in New York, so I’m a little biased, but I’ve always felt that New Yorkers are among the most industrious and freedom-loving people in the country. Throughout its history, our state has been home to incredible people who have made extraordinary contributions in business, medicine, manufacturing, construction, and nearly every other industry imaginable. We’ve produced some of the greatest inventors, entrepreneurs, and civic leaders the world has ever seen.

That’s why it’s so important to give New Yorkers the freedom to keep astounding the world. The people of our state truly deserve to be represented by Congresswoman Claudia Tenney, a stalwart defender of economic prosperity who has always been focused on securing our state’s future.

While in Congress, Tenney voted to support my father’s policies 96.8 percent of the time, backing him on middle class tax cuts, healthcare, immigration, and other key policies.

"I think Claudia is going to do great," the President said when he hosted a fundraiser for Tenney in August. "You gotta help her because she is running against somebody that's a total puppet of Nancy Pelosi."

I wholeheartedly agree with my father — if Tenney’s Democrat challenger, Anthony Brindisi, wins a seat in Congress, he will join his Democrat comrades in stonewalling the President’s economic agenda and undoing everything he has already achieved.

This election cycle is like no other — everything that my father has done to rescue our country from years of uncertainty is at risk of being scrapped if the Democrats take control of Congress. The future of New York, and America, is in our hands — vote to preserve it by checking the box for Tenney on Tuesday.

Eric Trump (@EricTrump) is Executive Vice President of The Trump Organization and the second-oldest son of President Trump.