Erick Erickson
|
Posted: Mar 02, 2018 12:01 AM
Share   Tweet
The opinions expressed by columnists are their own and do not necessarily represent the views of Townhall.com. 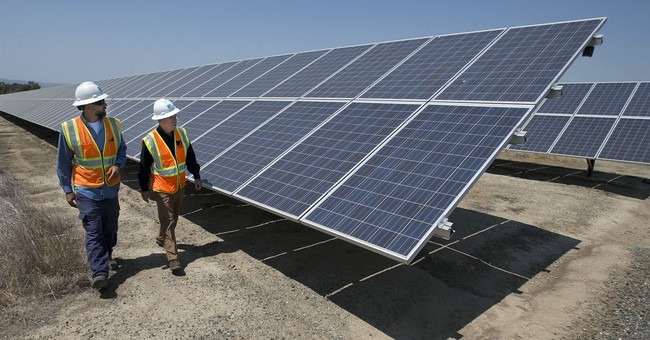 On June 20, 1979, then-President Jimmy Carter dedicated solar panels newly installed on the White House roof, saying, "In the year 2000 this solar water heater behind me, which is being dedicated today, will still be here supplying cheap, efficient energy." Less than a decade later, President Ronald Reagan had the panels removed. The panels of the day were not very efficient and were doing little more than heating water.

Fast-forward to today and it is clear the Carter-era stunt did much to cement in the minds of conservatives that solar energy is a waste of resources and must be subsidized. Compounding conservative distrust, liberals from coast to coast insist that the government subsidize wind and solar power to more quickly replace carbon-based energy sources. Conservatives see the left pushing for a subsidy of Carter's solar legacy and they naturally gravitate toward traditional power monopolies.

Unfortunately, the traditional power monopolies are taking advantage of this. And in some parts of the country, energy prices are soaring despite the United States' overwhelming oil and natural gas production, and the addition of solar- and wind-power facilities to the national power grid. Look no further than South Carolina to see monopolistic traditional power companies stifling free-market innovations in power. The state, more and more an economic free-market engine, is slowing down with the most expensive energy costs in the southeast.

Just a few years ago, then-Gov. Nikki Haley convinced the state legislature to let the private sector explore solar power as a way for homeowners to lower their power costs. Homeowners could offset the costs of solar panels by sending excess power generated by their panels out onto the power grid. The power companies would give those homeowners a credit for that power. But to get around the power monopolies' objections, South Carolina set a 2 percent cap on the number of homeowner solar installations allowable. The projections at the time suggested it could be a decade before that cap was reached. Well, a decade turned into just about two years.

Now, as the legislature looks at getting rid of that cap, the power companies have sprung into action with nightmare scenarios about their potential bankruptcies. These are the same power companies that put most of their eggs into a nuclear power plant basket that has gone bankrupt.

This past week, I drove over to South Carolina to talk to a group of legislators gathered by my friend Matt Moore, the former chairman of the South Carolina Republican Party and current chair of the Palmetto Conservative Solar Coalition. As a disclosure, they were kind enough to give me an honorarium for making the drive over. Matt's group has partnered with CRES Forum (Citizens for Responsible Energy Solutions), a conservative group trying to convince Republican legislators that they can safely support clean-energy alternatives without being perceived as liberals who want to subsidize billionaire liberals' pet projects.

CRES Forum has conduced research showing conservatives' growing support for clean energy. It used to be that a conservative suggesting people put solar panels on their roofs would immediately be labeled a RINO, or worse. Now, conservative legislators are pointing out it is not conservative to stifle competition in favor of 19th-century power generators. Government subsidies are not needed. The free market just needs to be allowed to work. The conservative state legislators who deregulated power markets now need to deregulate power-generation methodologies.

As I explained to the legislators, businesses around the nation would love to move into free-market states and finally distance themselves from high-tax, high-regulation unionized states. But many of these businesses also want to be in states that will not be hostile to the businesses and their employees putting up solar panels instead of relying on energy companies. Rejecting any and all approaches to power production is not only propping up monopolies but also betraying the spirit of American ingenuity.