Erick Erickson
|
Posted: Oct 20, 2017 12:01 AM
Share   Tweet
The opinions expressed by columnists are their own and do not necessarily represent the views of Townhall.com. 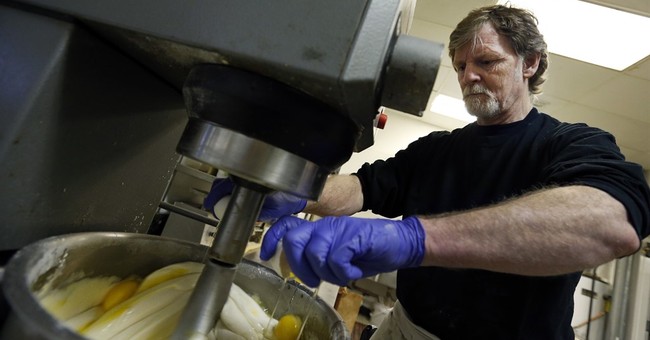 The American media would have you believe there is a concerted effort among Christians in America to discriminate against gay Americans. "No gays allowed," they claim small Christian business owners are saying. It is a fiction created to avoid dealing with the facts. The fact is I am unaware of any Christian business that refuses to serve gay customers, but I am aware of many gay activists targeting Christian small businesses for persecution.

The latest issue is also the one where the left has most dramatically overplayed its hand. Jack Phillips, a baker in Denver, CO, has been compared to a Nazi participating in the holocaust. A member of Colorado's Civil Rights Commission said that. What crime did Phillips commit? He dared to offer a cake to a gay couple for their same-sex wedding.

You may need to read that last sentence again. Phillips is both a committed Christian and a renown artist. His cakes are elaborate creations. Phillips was willing to provide a cake for the same-sex wedding, but Phillips was not willing to provide his extra artistic talents for the particulars that the couple wanted. They could have the wedding cake, but he was not going to customize it the way they wanted it. For that, Phillips had to be prosecuted.

Before going further, it would be helpful for you to know just how committed a Christian Phillips is. He will gladly bake a cake for a gay person, but he will not bake a cake for a Christian who wants a Halloween themed cake. Phillips believes Halloween is a pagan holiday that dishonors God, so he will not lend his artistry to its celebration. He will not bake cakes for anyone's second wedding, even if a church is willing to do the wedding. Divorce is a sin. Phillips will not bake cakes celebrating other religions' religious holidays.

But Phillips was willing to bake a cake for the gay couple for their wedding. Still, he must be prosecuted because he would not customize it the way they wanted. For that, he must be shamed, boycotted and compared to a Nazi. His case is now before the Supreme Court. He goes in the company of Baronelle Stutzman. She regularly provided flowers to a gay couple in Washington. She had a long list of gay customers that she lovingly served. But Stutzman would not provide flowers for same-sex wedding of her long time customers. The couple did not file charges against Stutzman. They were, after all, friends and long time customers. But the State of Washington pursued her anyway.

Stutzman was found guilty of discrimination by the Washington State Supreme Court and risks losing her home, her business, and even her dog because of the judgment unless His Majesty Anthony Kennedy, the supreme ruler of the United States, deigns to carve out some small exception for Christians in private enterprise.

It really all comes down to Anthony Kennedy, who decided the Supreme Court had the power to change the multi-thousand year old definition of marriage, despite the government not having created it. Now Kennedy will tell us whether the First Amendment's "free exercise of religion" language means we can actually freely exercise our religion or only believe it without living it.

What the Christians before the United States Supreme Court want is not a ruling that says they can discriminate against gays and turn away a gay couple from their business. All they want is a ruling that says their artistic talents are speech and their speech cannot be compelled to endorse a religious ceremony they disagree with.

The compromise here should be obvious. Just as we should abhor the idea of forcing a black printer to print the fliers for a Klan rally or forcing the Muslim butcher to carve a pig for a church barbecue, we should not force the Christian to provide goods and services to a religious ceremony their religion decries as sin. You may disagree, but who are you to tell someone else how to live his faith? Anthony Kennedy, though, is our supreme ruler and he will tell us all.