How Much Must We Compromise Our Values?

Erick Erickson
|
Posted: Feb 26, 2016 12:01 AM
Share   Tweet
The opinions expressed by columnists are their own and do not necessarily represent the views of Townhall.com. 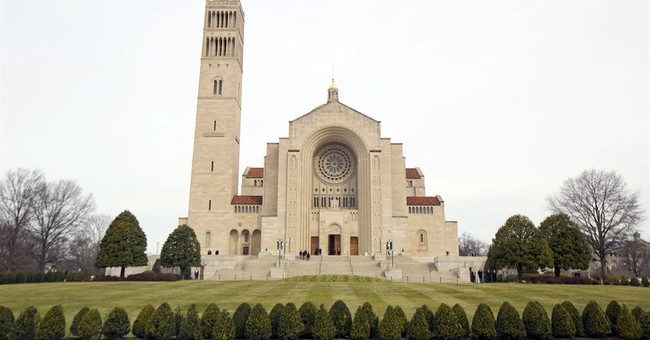 Robert Jeffress is the senior pastor of First Baptist Church in Dallas, TX. Jerry Falwell, Jr. is the President of Liberty University and son of moral crusader Jerry Falwell. Both have endorsed Donald Trump.

Falwell has vouched for Donald Trump's strong Christian faith. Jeffress called Trump "a great leader, a great visionary and a great American." Both men have used their ties to the evangelical community to bolster Trump's credibility.

But Trump has said repeatedly that he has never had the need to repent - a basic tenet of Christianity. The man has committed adultery, among other sins, is on his third marriage, says he has no need to repent, and Jerry Falwell and Robert Jeffress are lending their credibility to Trump's.

In the South Carolina debate, Trump praised Planned Parenthood as "wonderful." The organization chops up children and sells their organs. Jeffress and Falwell have endorsed a man who calls that organization "wonderful" and whose President, Cecile Richards, has kind things to say about Trump.

Just how much must evangelicals and conservatives compromise themselves to support Trump? That is the ultimate problem. Every person supporting Trump has not just compromised on a candidate, but compromised their core values.

Beyond that, Donald Trump still supports a Canadian style, socialist healthcare program. The tea party movement sprang forth to fight Obamacare, a less socialist system than what Donald Trump advocates.

At some point, people are being asked to compromise their values too much. Some, like Jeffress and Falwell, now find themselves defending a man who defends an organization they both despise. Others defend Trump on positions he has conveniently adopted and will no doubt abandon when it no longer suits him. These people are compromising their integrity for a Presidential candidate willing to use profane language on the campaign trail and bombast to overcome a lack of knowledge of details. "For what does it profit a man to gain the whole world and forfeit his soul?"

Unfortunately, the window on stopping Donald Trump is closing. To stop him, Ted Cruz and Marco Rubio are going to have to tag team Trump. It is not that attack ads on Trump do not work. It is that few have ever done them. People do not know his record or background.

My suggestion has been simple. If Cruz and Rubio will not unite themselves, their supporters are going to have to overcome their distrust of each other and agree to support whoever is closest to Trump in the polls.

It does neither side any good to divide and let Trump win. Neither Cruz nor Rubio will be the nominee if they do not stop Trump. So both sides must agree to support whoever is doing best in their own state against Trump. Once Trump is stopped, then Rubio and Cruz can slaughter each other to win the nomination.

Donald Trump forces too many people to compromise too many core convictions and to suspend beliefs about his actual positions. But the only way to stop him is for Cruz and Rubio to unite. They need to do so now.