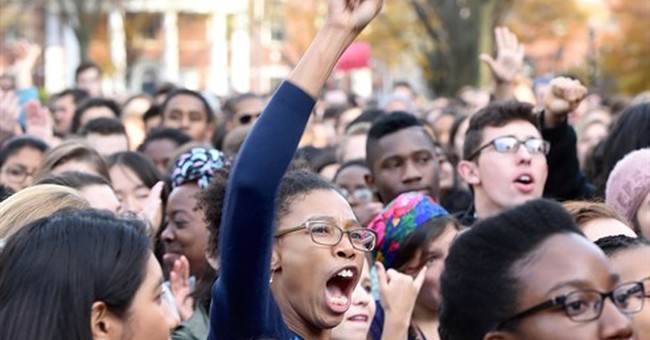 Trending
Students at Yale University, a bastion of wealth and privilege, are angry because an employee at the university dared suggest that if white children want to dress up as the Disney character Mulan for Halloween, it would not be inappropriate but instead would be children dressing up as a favorite character.

Clearly, this person is a white, privileged, racist bigot. Or at least she is in the minds of the college students as Yale. Never mind that an Ivy League university had people engaged in a debate on the appropriateness of Halloween costumes to ensure people were not offended. Students demanded safe spaces, and Yale wants to provide them with safe spaces.

Safe spaces, for these children ages 18 to 20-something, are places where they need not be confronted with ideas that hurt their self-esteem. Having been raised with participation trophies and ribbons for scoreless Little League games, these children think exposure to the "other" is more than they can bear.

At the University of Missouri, students are protesting because people are not nice. Some group of students allegedly was yelled at because of their race. Because the university did not respond quickly enough to dry the eyes of the victims and burn the city down in vengeance, the students are now protesting. The university's president has resigned -- a sensitive liberal who evidently was not sensitive enough. A college professor has resigned; he would not cancel his exam, and students demanded his resignation because he clearly did not appreciate their "blackness." Mizzou's football team got in on the act. Mizzou is one of the worst teams in the SEC and seemingly decided to use this whole situation as an excuse to give up on even trying.

The president of the student body at this bastion of white privilege and racism is black. He claimed the KKK had infiltrated campus, only to later admit he had made it up. The sensitive darlings and liars are being confronted with reality, and they cannot bear the fact that some people are mean, that others may disagree with them, and that there are letter grades instead of participation trophies.

Zhang Tiesheng, my friend Ben Domenech reminded me, was a 22-year-old farmer in 1973 in China. He walked off his farm to a college and could barely complete questions on his college entrance exam. He turned over the exam and wrote a tirade about bureaucratic "bookworms who ignored their proper occupations." He blasted college entrance exams as tools of repressive capitalism. Mao Zedong heralded Zhang as a model and he joined in as a hero of the cultural revolution, wherein the communists purged China of anyone who knew anything remotely useful.

Ultimately the people of China turned against the revolution and Zhang was jailed along with others. Getting out of prison, the communist started a capitalist endeavor called a business. He is now an aged multimillionaire. On American campuses, the revolutionaries of the '60s who demanded studies in white privilege and treat gender studies as a legitimate major are now being consumed by the revolution they helped start.

The reality is this. We are tiny specks on a tiny blue orb that orbits a giant ball of plasma. If our tiny blue orb tips a few degrees over in either direction, we all die. On it, we hurtle through the vast emptiness of space, a cold and unfeeling vacuum. At the end of our days, we either go live with our Creator or burn in an eternal hell. The kicker is that even if you do not believe that, you still burn for eternity, but you yourself think your end comes with your being consumed by worms and rotting.

The world is a nasty, awful, unfair place in a cold, uncaring vacuum of hostile space. The universe is not fair, and life is not fair, and no matter how much these students demand safe spaces, none really exists. Instead of protesting for respect or demanding fairness, they should learn the one great lesson that all must learn to have a peaceful existence until the worms return our bodies to the trees: Suck it up, because life isn't fair and never will be.

Fox News Contributor Zeroes In on Everything You Need to Know About the Omicron Variant.
Matt Vespa