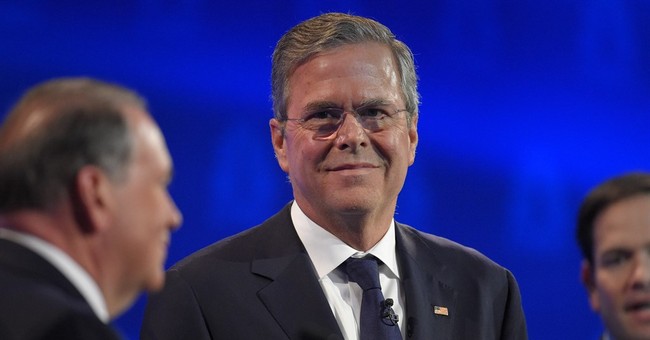 Trending
The attack came with the reluctance of a good man knowing he must do something he does not want to do. At the CNBC debate in Boulder, CO, the pretentious moderators asked Marco Rubio about missing votes in the Senate. For perspective, Rubio has missed far less votes than Barack Obama, Hillary Clinton, or John Kerry when they ran for President from the Senate.

Sensing he must have a moment of combat, Jeb Bush reluctantly weighed in on the issue, claiming that the Senate was like the French work week, and that surely Marco Rubio could show up for work three days a week.

Jeb Bush is a really nice guy. He really does care about the future of the country. He clearly did not want to go on the attack. Bush's donors are worried he does not have what it takes to stay on the campaign trail. Bush needed to show them he had the fire in the belly. His half-hearted attack on Rubio was his version of his father saying "message: I care" on the campaign trail.

When Rubio responded, he did so in the most devastating way. First, he noted that Jeb Bush backed John McCain in 2008 and never complained about McCain missing votes in the Senate to campaign. Then Rubio pointed out that Bush did not seem to want to make the attack, but someone made Bush do it. Both what Rubio said and how he said it left Jeb Bush looking pitiful and feeble. The former Jeb Bush protege, at that moment, became Bush's master.

At the next memorable moment for Bush, the moderator from CNBC asked him about fantasy football. Bush went for the "make me relatable" card and dove right into delivering a humorous answer. Then the moderator moved on to Chris Christie, who launched into an attack at the question; Christie gave the answer Bush should have given, and thereby totally overshadowed Jeb Bush.

The time has come for Jeb Bush to reconsider his future. He clearly does not enjoy being on the campaign trail. He is not a man for this season. He has not held elected office since January of 2007 and it is showing. Worse, he is having to make the case that a third Bush is the best person to pit against the second Clinton -- while on the stage with new, young faces of a Republican Party that has moved beyond the Bush legacy.

Jeb Bush should have run in 2012, but he would have even then been anchored by his last name. It is relatively unfair that Bush is anchored by his last name, but it is true. It is also true that he was once very successful politician, but that was a decade ago. Bush stands on a Presidential debate stage and we can almost hear him wondering what happened and how everything passed him by.

If Jeb Bush is not willing to fire a lot of people and retool his campaign, he needs to settle on being a former Presidential candidate. Those of us who like him, whether or not he is our choice for President, hate to see a good man descending to farce and a kind man descending to has-been status.

As a final point, the CNBC debate moderators were truly awful. CNBC could have saved a lot of money by letting actual monkeys fling poo at the candidates instead of having human beings do it. The most memorable moments of the night were Ted Cruz, Marco Rubio, Chris Christie, and Donald Trump beating up the moderators. Everyone had an opportunity to do it, but Jeb Bush instead delivered a half-hearted attack on Rubio instead of piling on the liberals on stage. It was pitiful and he needs to rethink his future.