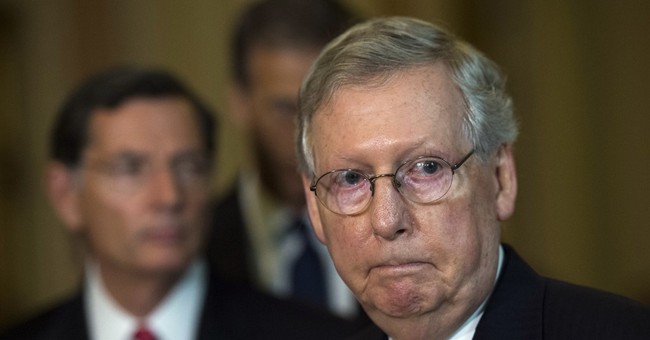 The Export-Import Bank is the height of crony capitalism. The bank uses taxpayer subsidies to make it possible for some American companies to sell their manufactured wares overseas at a lower price. It leads to absurd results like Boeing being able to sell its planes to foreign airliners at a cheaper rate than American aviation companies can buy them.

While Republicans in Washington are doing everything in their power to prop up a crony-capitalist regime for lobbyists, they are not putting even half as much energy into defunding Planned Parenthood. More videos continue trickling out about Planned Parenthood. The latest video showed Planned Parenthood employees actually taking people into rooms full of children's harvested organs where they could haggle over price.

Several political consultants tell me the Planned Parenthood videos are doing serious damage to the left. In fact, the organization had to hire a Democrat-affiliated communications firm to do damage control. Part of that damage control was an effort to press media outlets to refrain from covering the story.

Perhaps it is no coincidence that within 24 hours of a lion being killed in Africa, ABC, CBS and NBC combined had given more coverage to the death of the lion than they had given to the Planned Parenthood scandal in two weeks. Credible political operatives tell me that in addition to firing up evangelical voters, the Planned Parenthood story angers Hispanic voters. Hispanic voters are, after evangelicals, the most pro-life voting constituency in the United States.

But Republicans in Washington would rather focus their energies on helping lobbyists, not helping children. They will go to the mats for a crony-capitalist regime that uses taxpayer money to pick corporate winners and losers. They will not stop giving taxpayer dollars to an organization that cracks open the skulls of children to remove and sell their brains.

This is where rubber meets road for Republicans. Virtually all of the 2,317,000 Republican presidential candidates (the list keeps growing) have demanded that Congress investigate and defund Planned Parenthood. Senate Republicans intend to do a show vote that will not get enough votes to overcome a filibuster. Will they then let it die? Will they decide they cannot defund Planned Parenthood? Or will they fret over a presidential veto?

Ultimately, the question is whether Republicans will risk a government shutdown to cease funding an organization that kills American children and harvests their organs for money. What the nation is learning about Planned Parenthood is that it makes a lot of money selling livers, hearts, lungs, brains and other body parts. Why should taxpayers fund it?

Since the rise of Ronald Reagan, the Republican Party has been the pro-life party. But it has been more a legacy of Reagan than a desire of its party leaders. Republican leaders in Washington talk a good game about pro-life issues, but they never really have been willing to put points on the board unless pushed by a Republican president. They throw the movement occasional bones, but what about now?

The national media will not cover the savage butchery by Planned Parenthood. Forcing this fight in Congress will force coverage. They will spin it against Republicans, but every member of Congress who speaks up could stand surrounded by the images of butchered children so that all Americans can see what they are fighting for.

Shut down the government if that is what it takes. Shut it down now. If Republicans cannot stand on this high ground, they should not stand at all. Children are being ripped apart and their hearts, brains, lungs and livers sold. Is this not a fight worth having?