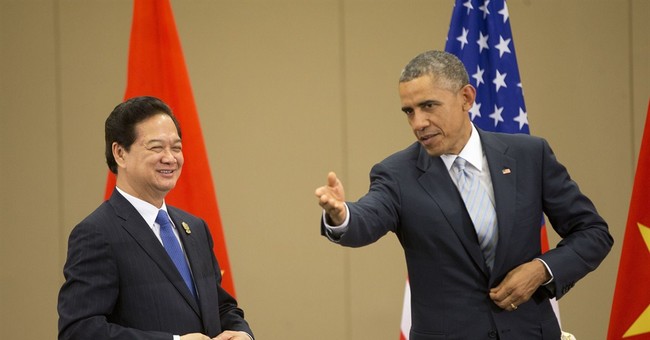 President Obama flew to China a few days ago and announced a joint environmental pact with the communist regime. The United States will reduce its carbon emissions substantially over the next 11 years. China will do absolutely nothing but hope that its emissions decline after 2030.

The press heralded this as a major accomplishment. The rush from the press as soon as it was announced suggested a high level of coordination. Like lemmings in a staged dive off a cliff, "historic" became the media's rallying cry. There is nothing historic about the deal. In fact, news reports from November 2012 noted that China expected, in 2012, that its carbon emissions would begin to decline after 2030 because of factory upgrades, efficiencies, etc.

Like so much of President Obama's decisions over the past six years, this is another photo-op with a compliant press that does not matter and will do little. In fact, since the beginning of the 21st century, the left has demanded immediate action under the mantra of the "fierce urgency of now." Around 2007, we learned the Arctic would be ice free by last year. It was not. We learned there would be ever-increasing super-storms across the Atlantic. That has not happened, either. Environmentalists have taken to act like Harold Camping, the now-deceased founder of Family Radio Worldwide. Camping repeatedly made headlines for predicting the end of the world.

Environmentalists who have turned their cause into a religion just as frequently engage in apocalyptic, end of world pronouncements. Nonetheless, the best these believers can do is hail as "historic" a plan that requires nothing on China's part and will never get implemented in the United States. It is not a coincidence that President Obama did not do this until after Republicans took control of the United States Senate.

At the same time, President Obama intends to broadly enact immigration reform through executive measures. He will defer or delay the deportation of many, allow many to stay in the United States halfway between the light and shadows, and give more visas to immigrants. The plan is so popular he had to wait until after the election to do it.

Republicans should reciprocate by denying Barack Obama the pleasures of office he enjoys. Make him pay for the power bill in the White House. Shut down all federally controlled golf courses within the flight distance of Marine One. Cut funding for all but security for the first family. Turn Camp David into a refugee processing center. If the president wants to play games, the Republicans should reciprocate and bring back out the petulant man-child characteristics President Obama tries so hard to repress.

Regardless of how Republicans respond, there are two reasons Barack Obama has decided to do both of these things now that the election is over. The first is to try to move beyond the story of last week. Election results are still trickling in, and more Democrats are losing in very close races. He wants to move beyond all talk of Democratic defeat.

More importantly, Democrats on the campaign trail wounded President Obama's ego. They said he no longer matters. They said he would be a lame duck. But he is still president, and Barack Obama desperately wishes everyone to know he is still very relevant. He still has veto power. He still can use executive orders. He can still fail to defend the nation from threats like ISIS.

That, of course, presents a problem for the Democrats. Post-election Pew and Gallup polling show a majority of the public desires Republicans now set the agenda in Washington. In his quest to prove his relevance, Barack Obama insists he still set the agenda. With Democrat party popularity cratering, this will only hurt them more.

Democrats need for the president to sit on the sidelines and let the Republicans screw things up. Instead, their vainglorious leader intends to stay at center stage, demand everyone treat him as relevant and keep screwing up everything he touches. The Republicans, if nothing else, know how to stand out of the way when their opponent is defeating himself.