Article One and Stunts 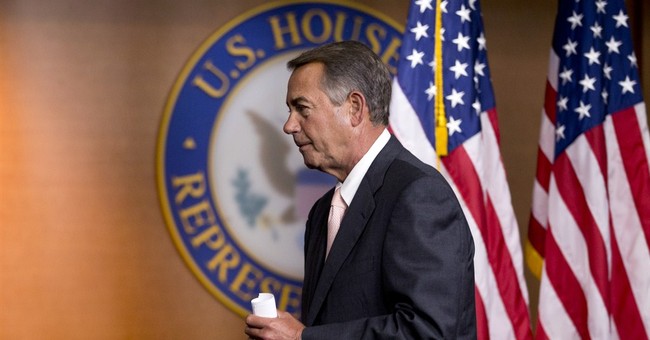 Speaker John Boehner intends to draft legislation in the House of Representatives that would authorize a suit against the president of the United States. The legislation would only pertain to the House, so it would not need the Senate's consent. Given the partisan composition of the House, the legislation will pass. Speaker Boehner will use taxpayer dollars to sue President Obama over President Obama's use, or disuse, of his powers.

The suit will have a legal basis. In fact, there are some legitimate complaints about the president's use of the executive branch to modify his health care law without congressional consent. There are plausible justiciable bases for the suit. But the suit is mostly a political stunt. A suit of this nature, filed at year's end, would wind its way through the district and appellate courts, finally reaching the Supreme Court most likely after President Obama is out of office.

The House Republicans collaborated with their Senate colleagues and gave President Obama a blank check to increase the debt ceiling to March of 2015. Now they want to spend additional taxpayer dollars to ask federal courts to stop a president they themselves enabled.

Contrast this run to the judiciary with the House's own powers. The founders of the nation gave the House of Representatives two exclusive powers. The first is the power of impeachment. Reasonable people may disagree on this, but it seems unwise to try to impeach President Obama.

It would end badly for the Republicans. Speaker Boehner, just the other day, said as much. Impeachment, wisely, is not on the table. At this point, it is not even a sure thing that the Republicans have the votes within their own caucus to attempt it.

But there is another exclusive power given to the House of Representatives by the founders. James Madison, the chief architect of our constitution, described this exclusive power of the House in Federalist 58 as "the most complete and effectual weapon with which any constitution can arm the immediate representatives of the people, for obtaining a redress of every grievance, and for carrying into effect every just and salutary measure."

"The House of Representatives cannot only refuse, but they alone can propose, the supplies requisite for the support of government. They, in a word, hold the purse," James Madison wrote. But the House of Representatives will not use the power of the purse to rein in the president. It would be the right thing to do. It resolves the claims Republicans make about the president's abuses of power, defunding each one, without resorting to political stunts in courts using taxpayer dollars.

But it will not happen. The House Republicans, as much as they are afraid of a political disaster involving impeachment, are horrified of being blamed for a government shutdown. The prior government shutdown certainly saw a decline in Republican popularity, but it was a mixture of those angry they did not keep up the fight and those angry they fought at all. It was also short term.

Therein lies why this lawsuit is a political stunt. The founders gave the House of Representatives the power to stop much of what they complain about by withholding the funds to continue the shenanigans. But they gave the president a blank check to raise the debt ceiling and have themselves continued to fund Obamacare and all the other agencies they are upset about.

They will run to the courts and ask the courts to stop the president while they keep the cash flowing to fund the very abuses they are using our taxpayer dollars to file a lawsuit over.