Preserving Power at Any Cost 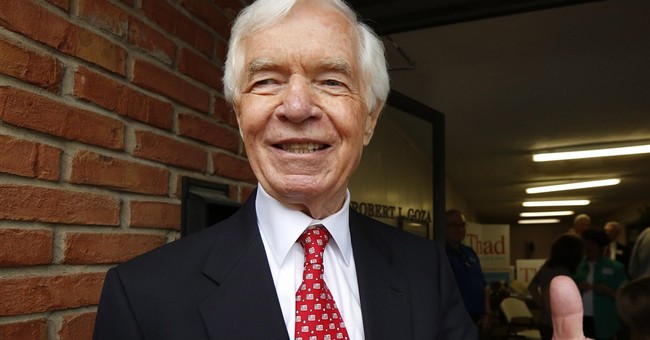 Last Tuesday in Mississippi, incumbent Republican Sen. Thad Cochran beat his challenger, State Sen. Chris McDaniel, in a Republican runoff. There is no dispute that Cochran won by bringing thousands of Democrats into the Republican runoff to support him.

Cochran's victory, if left unaddressed by conservatives, will set a dangerous precedent within Republican primaries. Republican PACs, national Republican political operatives and the Republican establishment collaborated to accuse conservative and tea party activists of racism. These Republicans painted their very base as the second coming on the KKK and Hitler.

These groups accused Chris McDaniel of being a neo-confederate and claimed that any group that supported him was supporting a racist. They passed out flyers designed to scare and intimidate black voters into voting for Cochran. One of the flyers had scenes of the civil rights struggle on it and declared Chris McDaniel would take away the right to vote.

It was all hysterical nonsense, but it worked. This is a tactic Democrats have used in the past to generate black turnout. In Georgia in 1998, flyers appeared in black neighborhoods in Atlanta with pictures of burning crosses and hooded Klansmen. The flyers urged black voters to go stop Republican gubernatorial candidate Guy Millner, lest all the advances of the civil rights movement be undone.

In Louisiana in 2003, Democrats in northern Louisiana passed out flyers to white Democrats that darkened Republican Bobby Jindal's skin color, making him look like a black man. The flyers encouraged white Democrats to go stop Jindal's election. It worked, but Jindal won the Governor's Mansion in 2007 with the votes of many who had opposed him after those voters saw just how incompetent Governor Kathleen Blanco was in office.

Democrats excel at this level of racial politics. But last Tuesday in Mississippi, it was Republicans doing it. National Republicans and their local allies in Mississippi made those attacks on their own base. They painted their own voters as crazy, bigoted racists. They were willing to do it to keep Thad Cochran, a man who has been in the Senate since 1978 and in Washington since 1973, in office.

Why Republicans were willing to attack their own base so savagely is eye opening. Former Mississippi Gov. Haley Barbour left the Governor's Mansion and returned to his former career as a lobbyist. He ran of the key super PAC's supporting Cochran. Many lobbyists in Washington have, for years, used Thad Cochran as a marionette, pulling his strings and getting him to spread American tax dollars around.

Years ago, when a Jack Abramoff associate complained that Ann Copland, Cochran's executive assistant of 29 years, demanded too many things, i.e. tickets to see Paul McCartney and Green Day, Abramoff replied back, "She gets everything she wants." Abramoff and Copland both went off to jail. Cochran stayed, and the money flowed in other directions.

The Republican establishment in Washington no longer has core principles and values. It has a list of corporate donors and rich men with business interests. The party keeps its elderly leaders in the House and Senate to send American tax dollars to their preferred donors. In fact, all the Republican Party stands for at the moment is telling President Barack Obama "no" and rewarding large donors with tax breaks, government contracts, and our tax dollars.

To keep power, the GOP focuses more and more on a smaller and smaller band of puppeteers to keep their marionettes upright. At some point, there will be more people with knives out to cut the strings than there will be puppeteers with checkbooks. And at some point those people with knives become more intent on cutting the strings than taking the place of the marionettes.