Erich Reimer
|
Posted: Jan 11, 2018 12:01 AM
Share   Tweet
The opinions expressed by columnists are their own and do not necessarily represent the views of Townhall.com. 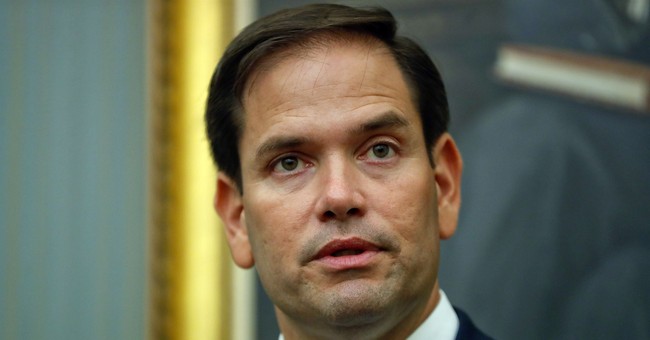 Senator Rubio on Tuesday convened and fiercely led the first public hearing demanding answers for what appears to have been a systematic and targeted attack on American diplomats working in Cuba possibly by the Cuban government.

State Department officials were grilled before the Senate Foreign Relations subcommittee for both answers on the attack and the apparently slow response to investigating and taking countermeasures against it. In overseeing the hearing, Senator Rubio did a remarkable job in beginning to find out exactly what happened and how we can ensure the Castro government does not swat us around and so brazenly prey on our diplomats.

For those unaware of the Cuba incidents, since about November 2016 roughly 24 American diplomats in total based in Havana were reported to have been suffering from an intense and unknown illness.

The illness resulted in them hearing a “high pitched beam of sound,” whether for a moment or continuous, that resulted in dizziness, heavy fatigue, nausea, and sharp pain in the head and ears. Some diplomats have even been found to have memory lapses and brain damage.

The United States government retaliated by expelling almost two-dozen Cuban diplomats from D.C., bringing many of our diplomats in Cuba home, and discontinuing visas for Cubans hoping to visit the United States.

While it remains uncertain what technology or biochemical element was used to cause the illness, the State Department and legislators in Congress have cited it as a “deliberate attack,” in the words of Secretary of State Rex Tillerson.

As of right now, all trails have been pointing to the Cuban government as either having knowledge of who was behind the attack or even orchestrating it themselves.

The Cuban government, of course, denies any involvement or knowledge, despite its long history of harassment and attacks on Americans abroad and even within our own nation.

Theories about the attack’s technical mechanism have ranged from the attackers using an electromagnetic device to sonic weapons to some kind of “viral” biological attack, according to State Department security director Todd Brown at the Senate hearing on Tuesday.

Our diplomats are some of the bravest of our public servants. They represent our country in foreign and sometimes quite hostile nations, spending much of their careers away from family and friends, as well as risking their lives, to promote American interests across the world.

When the Benghazi attack in 2012 resulted in the death of our Ambassador to Libya, Christopher Stevens, as well as U.S. Foreign Service officer Sean Smith, and CIA contractors Tyrone Woods and Glen Doherty, our nation swiftly acted and searched for answers for years afterwards.

At a crucial time for the potential of liberty in Cuba as the Castro regime’s iron grip begins to slowly crack, it is important for the United States to not simply sweep this whole episode under the rug and let the Cuban government get away with whatever game they are playing.

It is possible they attacked our diplomats in order to deter us from staffing our embassy there while still trying to keep the benefits of their presence in D.C. and reduced economic barriers as a result of the Obama Administration’s far too accommodating Cuba “opening.”

Many of those benefits were scaled back, particularly in regards to economic benefits for the Cuban military, when President Trump and Senator Rubio unveiled their ”Better Deal for Cuba” policy in June, which I’ve written previously about.

If we begin to uncover further evidence of the Cuban government’s role, it is certain our policy response will, rightfully, be even harsher.

Undoubtedly the hearings on what precisely happened in Havana to dozens of our nation’s diplomats will continue, thanks largely in part to Senator Rubio’s rightful insistence on the issue.

Senator Rubio has made clear he won’t stop till he finds answers, and is already bringing the issue to the attention of many other legislators on both sides of the aisle.

It is important for our nation to hold our ground and not let ourselves get bullied by tyrannical regimes, whether they be Cuba, Iran, North Korea, Venezuela, or otherwise.

By standing up for our values and interests, we not only protect our citizens but also show to the world, and especially those clamoring for freedom under authoritarian regimes, the power and might of our liberty-based ideals.