And They Call It Puppy Love

Emmett Tyrrell
|
Posted: Oct 20, 2016 12:01 AM
Share   Tweet
The opinions expressed by columnists are their own and do not necessarily represent the views of Townhall.com. 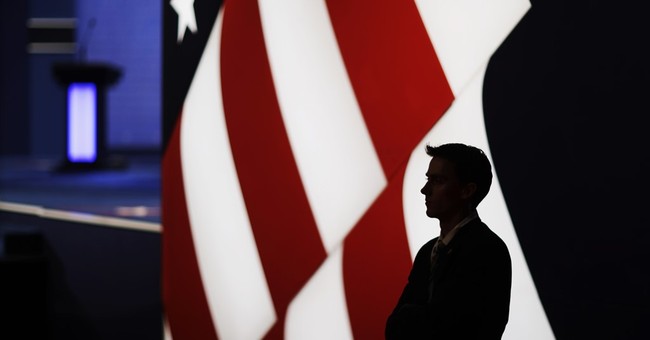 Trending
LONDON -- I am in jolly old London for a Spectator debate about America's presidential candidates, Donald Trump and What's Her Name. London is resplendent as ever, and at this point in the election cycle my wife is patrolling my behavior, lest I hazard our bank account by popping into Anderson & Sheppard to order another suit or seeking psychiatric refreshment.

I am, of course, arguing for the Republican candidate against the fascist, and I predict a close election. Somehow, Hillary Clinton -- the fascist -- has everyone in the media scandalized and fretting over Trump's flirtatious nature back when he was a TV celeb, and no one in the press corps is even interested in her or her husband, Bill the Groper. Did Bill Clinton harass women, and did Hillary Clinton employ private investigators to hound them? The mainstream media, or MSM, will ignore that topic. Though I published the investigators' names in this column several weeks ago and in a book, "The Clinton Crack-Up: The Boy President's Life After the White House," I wrote of their nefarious achievements. Did she commingle her foundation's work with her State Department business, raking in millions of dollars for her family, and expose classified documents on her home server so that our intelligence community was vulnerable and American agents were endangered worldwide -- and in at least one instance put to death? That is a minor complaint, say the MSM: "She is one of us. Let us move on."

The urgent question for the MSM is who Trump may have kissed back in his bachelor days when the sexual revolution was in high gear and it was cool for men and women to act like monkeys on monkey island at the zoo. Well, the sexual revolution is now over. Even Bill Clinton has slowed down. I, for one, think he looks a wreck. I cannot even imagine him thrusting himself upon a woman today. To those who in the 1960s and 1970s told us that sexual excess was a salubrious pursuit I say, look at Bill today. He is badly depleted, and I blame his libido.

So the MSM is throwing everything they have at Trump. They have gone too far. Frankly, even I was shocked late last week when I read in the Washington Post that back in 2005 Trump was taped clandestinely telling someone by the name of Billy Bush that he thought his TV-star status ensured him the ability to "grab any woman by the puppy" -- the prudish Post wrote it "p----," but we all know what it meant. Think about it. Why would Trump ever grab a woman's puppy? For one thing, he is famously a germaphobe. I was with him on his airplane just the other day, and he washed his hands at every opportunity. Additionally, such unrestrained behavior with a woman's puppy would surely get him in even more trouble with The Anti-Cruelty Society than he is with the MSM. Even I share the Society's concern for cruelty to animals.

I have no idea how the Post arranged the taping, but it almost surely is a fraud. This is but another absurd diversion by the MSM away from the real issues of this campaign and toward the gutter.

How times have changed. I well remember when the Los Angeles Times and The American Spectator published the Troopergate stories back in late 1993. All hell broke loose. The Arkansas state troopers who served as Clinton's bodyguards (and, incidentally, as his procurers) were traduced. The MSM jumped to his defense: The bodyguards were liars, his privacy was violated, and what about the sanctity of his marriage? Distinguished members of the press corps, such as Michael Kinsley and Joe Klein, called me dishonest, though at the time Klein was hard at work on a book about a little-veiled Arkansas governor's goatish ways. He called it "Primary Colors" and, not wanting to reveal himself, published it under the name Anonymous. Of course, the name Paula Jones emerged from the Troopergate stories. She sued Clinton for sexual harassment, and during the case's legal-discovery phase Monica Lewinsky's name came up. Clinton was eventually impeached.

But back then all this sexual innuendo talk was dismissed as, "It's only about sex. Everyone does it." Well, once again it is only about sex. And as you might gather from my mention of puppies, I find it absurd. What Clinton did in the 1980s and 1990s was while he was an official of the state -- including president. In fact, he was in state offices and state vehicles, and he used state credit cards. He did it in the Oval Office. Whatever Trump did was on his own time, years ago, and it's child's play when compared to the former president and his enabler, the first lady.

How about finishing this race by talking about the issues: taxes, the economy, national defense, immigration and Obamacare. How about Hillary Clinton's server and lies to the American people. Puppies? Forget about it.