Facing up to Bigotry

Emmett Tyrrell
|
Posted: May 05, 2016 12:01 AM
Share   Tweet
The opinions expressed by columnists are their own and do not necessarily represent the views of Townhall.com. 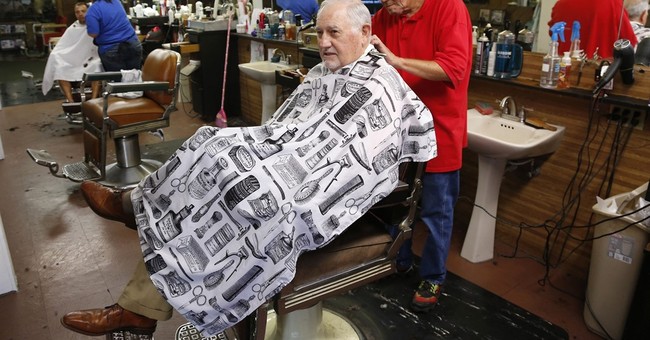 Washington -- If I were to confess my prejudice of Greek barbers, what would be said of me? Well, it would depend on where I said it. If I were in Athens and said that I prefer Greek barbers, my preference would be perfectly understandable. I might even become an instant celebrity. Times have been tough in Athens. If I were in Rome and expressed my preference for Greek barbers, I would be dismissed as an ignoramus and offered an Italian barber. If I were in Paris, well, most Parisians my age don't have much hair left, and therefore have little need for a barber. Many wear toupees, although I am told the cue-ball look is gaining acceptance.

Yet, back here in the United States, to confess my simple prejudice of Greek barbers is to run the risk of being denounced as a racist. No, it is true! Just ask Rev. Al Sharpton, who, by the way, could use a good Greek haircut, as his coiffure looks increasingly shaggy. There are many Greek barbers in Manhattan. While he's at it he might as well get a shampoo. If Al would desist from calling me a racist, I might give him the name of a fine barber up on Lexington Avenue, and I might even ask Demitri to throw in a manicure.

But I am afraid Al would not be able to resist calling me a bigot for admiring Greek art. Why not an African-American barber, the progressive refrain will go. Why not an Italian barber or an Icelandic barber? Am I denying other barbers the opportunity to cut my hair, shave my chin and perhaps clip my mustachio? Well, let me admit: I have never gotten a good haircut from an African-American. I have never come into contact with an Icelandic, and I have only occasionally received a haircut from an Italian. I must say that Italians are better than most non-Greek barbers, but they are never as good as the real thing: the Greeks!

Truth be told, I drive almost 50 miles round trip once a month to visit my Greek tonsorial wizard. I shall not reveal his name because he might suffer violence at the hands of his non-Greek competitors -- he is that good. And he only charges $14 for a haircut. There are female barbers in downtown Washington, D.C., that charge a minimum of $50 for a haircut and then begin tantalizing their customers with manicures, shampoos and even a chaste massage.

Well, I simply do not care if I am called a bigot and a sexist by the "politically correct" policia. In America today, we have been intimidated by the PC crowd to the point where the First Amendment is all but extinct. Just the other day we saw how political correctitude even ensnared Hillary Clinton.

When asked by Jake Tapper of CNN about Donald Trump's claim that she is "corrupt" (actually, all Trump did was allude to her lifelong record of scandal and controversy by calling her "Crooked Hillary," a coinage at once accurate and more lyrical.) she employed characteristic sophistry while traducing the entire population of Native Americans. She yawped, "I have a lot of experience dealing with men who sometimes get off the reservation in the way they behave and how they speak." What was she talking about? Was she referring to Bill Clinton's years of adulterous affairs, leading to many documented accusations of him fondling, forcing himself on, and in one case, raping one? Was she referring to her "experience" covering up her husband's transgressions and often enabling him? Was she referring to her role in slandering Monica Lewinsky? This is her and Bill's record, not Trump's.

Finally, what did she mean by referring to men getting "off the reservation"? Was she disparaging the lives of Native Americans? They may live impecunious lives -- perhaps even marginal lives -- on the reservations, but Hillary ought not to demean an entire race.

So, I will admit to my bigoted preference in barbers. But the Clintons ought to admit to their record with women. No other presidential couple has accumulated such a record, and I can think of few other first ladies who would speak so politically incorrectly about Native Americans.

And, while I am on the subject of public speaking, I listened to the White House correspondents dinner the other night. Nothing the Republican candidates have said through their long campaigns can compare to the bigoted and vulgar things that were said in one evening by the president and his comedic genius, Larry Wilmore.