Repeat After Me: 'President Donald Trump'

Emmett Tyrrell
|
Posted: Mar 24, 2016 12:01 AM
Share   Tweet
The opinions expressed by columnists are their own and do not necessarily represent the views of Townhall.com. 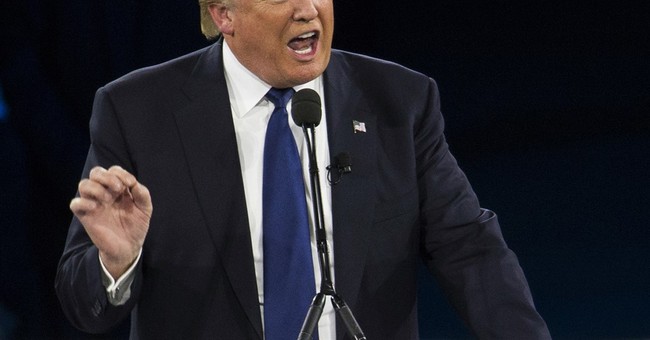 Washington -- People on the left think highly of themselves when they exalt the lowly poor, when they cry out for world peace and when they speak about a race. As these Americans on the left prattle on about their alleged noble ends (as opposed to the means to those ends), some conservative Americans have grown downright envious. They think to themselves, why can't we, too, think well of ourselves when we talk about poverty, international relations and race? The answer is that conservatives generally talk about specific policies that lead to jobs for the poor (a modus vivendi for hostile nations) and the rule of law for all Americans. Still, such talk leaves these conservatives covetous of America's sanctimonious left.

Their uneasy state of mind explains why some conservative pundits are so eager to inveigh against Donald Trump, comparing him to George Wallace and Adolf Hitler. One scholarly conservative even compared Trump unfavorably to Joseph Stalin. I shall mention no names, so that after these conservatives get over their self-indulgent hysteria, we can presumably renew our friendships. I cannot imagine how they are going to crawl back from the extreme positions they have taken. Maybe they will insist they were alluding to a different George Wallace, one who lives in Schenectady, New York, and is famous for helping old ladies cross the street. After all, the names Hitler and Stalin were quite common in Europe before Adolf and Joe blackened their reputations.

These name-callers are now plotting to ambush the Republican frontrunner at the Republican National Convention. Or perhaps they're plotting to run a candidate under a third party, as George Wallace did by running under the Independent Party.

I would suggest that these political Machiavels take on Trump at convention time. What we are witnessing in 2016 is the continued replacement of the national political parties, which the eminently sane Washington Post commentator, Robert J. Samuelson, calls "political entrepreneurship." He attests that if you want to become president "you don't need the permission of either party. You just announce, comply with the legal requirements for filing and launch your campaign." This kind of political entrepreneurship began with President Jimmy Carter, has continued to President Barack Obama and now to Trump. According to Samuelson, the arrival of political entrepreneurship "represents a major upheaval in U.S. politics." No wonder conservatives are anxious.

Trump is going to arrive at the convention with his 1,237 votes for the nomination, or he will be very close. Then, the man who wrote "The Art of the Deal" is going to be ready to deal. He will deal with John Kasich, the popular governor of the very important state of Ohio. Trump, by the way, has already expressed his admiration for Kasich. Or there is Scott Walker, the very conservative governor of Wisconsin. Another popular governor is Rick Scott from the voter-rich state of Florida, who has already joined a growing number of politically alive politicians to endorse Trump. I'm doubtless there are other potential deal-makers out there.

All of a sudden, powerful political leaders are showing a new appreciation for Trump, a man who is new to politics -- if not to public life -- but has shown astounding political skills, not the least of which is identifying issues popular with the electorate. What's more, he is finding new coalitions of voters to join the Republican Party, such as moderate Democrats and independents. My guess is that Trump is going to be difficult to outmaneuver at this forthcoming convention.

Yet the Republicans of uneasy mind can try. They will need a candidate -- right now. The only plausible candidate I have heard of is former Texas Governor Rick Perry. They will need to persuade a majority of convention-goers, assuming Trump has fallen short of the magic number of delegates in the first ballot. Finally, they will need plenty of smoke to fill the room. That is going to be very tough. Have you ever tried to carry smoke into an empty room? It's especially difficult when you don't even smoke.

Actually, I think I would forget about the smoke-filled room or persuading the delegates to recast their votes. If I were among the conservatives who have been throwing names like Hitler and Stalin at Trump, I would just start to practice enunciating the words "President Donald Trump" -- the sooner, the better.