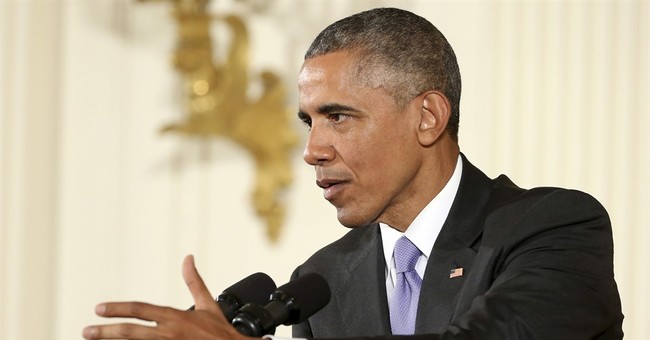 WASHINGTON -- The plot thickens! As we all know, the inspector general of the intelligence community has discovered that a small number of a small number of emails on Hillary Rodham Clinton's personal, albeit mysterious, server were, in fact, classified. She as recently as this weekend denied that they were classified, but we shall see. There could be many more classified documents on that server. After all, she herself admits there were some 30,000 more emails.

At any rate, the inspector general has made a "security referral" to the Department of Justice. According to federal law, the FBI will now begin an investigation of Clinton's server and, presumably, of her entire correspondence. At the outset of this imbroglio in early March, all she wanted to do was run for the highest office in the land. Now she may be running for her life ... once again. All this is because of an inspector general whose name and duties are not known to the wide public.

He might be a good guy. He might be a bad guy. But he certainly has begun a ruckus. Who is behind Clinton's latest brush with the law? Is it the vast right-wing conspiracy? Well, I am a card-carrying member of that particular conspiracy, and after checking with practically every co-conspirator including several White House gate leapers, I can tell you our hands are clean.

Actually, if I were to guess, I would say it was someone who actually works in the White House rather than a mere gate leaper. One has to have a lot of clout to set inspectors general and the Justice Department on someone as powerful as Clinton. Reporters might ask Valerie Jarrett what she knows about it. My agents tell me she loathes Clinton, and she has the ear of the president, who according to published accounts also loathes Clinton. Getting Clinton out of the presidential race would certainly do a lot to secure President Barack Obama's legacy, at least with Democrats.

Yet there is a complication with this theory. Last week, the White House stepped in and attempted to put an end to the work of inspectors general. It has ruled that inspectors general seeking to investigate their agencies will need permission from their agencies to lay hands on such things as wiretaps, grand justice testimony and even credit information. In other words, the agency about to be investigated by its inspector general is free to cooperate or not. It clearly will render the inspector general toothless.

Inspectors general have been a problem for this administration. It was a snoopy inspector general who infused life into the IRS investigation of that agency's harassment of the tea party movement. Early on, the Obama administration fired the inspector general of AmeriCorps, Gerald Walpin, for exposing the funny business of Kevin Johnson, the mayor of Sacramento. Johnson was Obama's pal, and Walpin accused him of misusing an $847,000 AmeriCorps grant. He reportedly was using it to pay his staff members to clean his car and otherwise serve as gofers.

How could shutting down the inspectors general benefit our president?

Well, our authoritarian president might be, as the phrase has it, killing two birds with one stone. By closing down the inspectors general, he might rid himself of an impediment to future acts of what is increasingly looking like a heavy-handed government. Moreover, that inspector general overseeing the intelligence community -- and another at the State Department -- have already thrown a monkey wrench into Clinton's run for the presidency. Obama -- and Jarrett -- can point to the administration's disarming of the inspectors general and claim they have been playing politics. After bringing on an investigation of the IRS and harassing the campaign of Hillary the Inevitable, this Democratic president has had enough, and who doubts that the Democrats will agree?

Thus Obama is rid of another obstruction to his authoritarian rule, and he can spend the remainder of his presidency enforcing his diktats while watching the delicious spectacle of an embattled Clinton seeking the presidency. In that last leisure-time activity, I shall be joining him. Have a beer on me, Barack.