A Modest Proposal for Education Reform 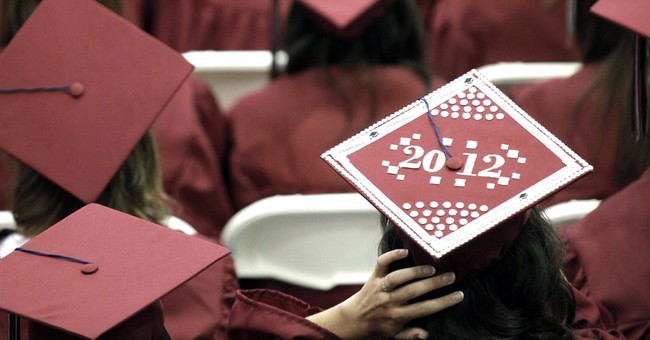 WASHINGTON -- Before he passed away recently, John M. Templeton, the distinguished physician and philanthropist, questioned: "Should we tolerate a public educational system with its entrenched self-interest which virtually every inner-city parent knows is destroying any hope or possibility of their children achieving meaningful opportunity in a 21st-century economy?" A growing number of parents say no. Now critics of the public school system are coming forward with alternatives to it, and many of them are parents, often parents of disadvantaged students, usually parents that fear for the fate of their children in schools in the inner city.

Stephen Moore, an economist at The Heritage Foundation, writes in The Wall Street Journal about the grim scene at a Washington, D.C., public school where a father, concerned about his son's attendance there, walked in past "two police cars ... (an) everyday routine. ... There was violence. Fighting. Disrespect and drugs." The father complained to the principal about what he saw, and she "shook her finger" at him and admonished, "Don't tell me how to run my school."

That is precisely the response I would expect from a modern-day unionized public school principal. The father would have been received more cordially if he had complained not about the chaotic environment of the principal's school, but about the police presence out in front. Had the principal not heard about Ferguson, Mo., or Baltimore, Md.?

I think Templeton asks the right question: Should the public tolerate an educational system that is "destroying any hope or possibility" of its students being prepared to live normal lives? What is more, Moore has the answer, to wit, increased state support for vouchers, which would allow the unions to maintain their failing system, but also would provide alternatives for parents interested in their children's well-being.

Now, from Atlanta -- recently the scene of a shocking cheating scam in which teachers and principals were complicit and are headed for jail -- comes a plan for alternative state funding of the school system that would provide widespread reform. It would incentivize parents to get involved with their children's education and thereby strengthen one of the crucial building blocks of society: the family. Moreover, it would expand the types of schools available to families, from religious schools to irreligious schools, from progressive schools to traditional schools. All that would be necessary is for the schools to meet reasonable accountability standards.

Glenn Delk wrote about the plan last week in The American Spectator. Here is the plan in a simplified form. The state legislature passes a law allowing families to establish an Education Savings Account for each child, placing up to $8,000 per student into a tax-free account. The money is there to use purely for educational purposes. Any funds left unspent in a year may be rolled over to the next year or for college.

Additionally, the state applies for a waiver from the federal government so the state can apply the $1 billion it already gets to Education Savings Accounts of $10,000 each for the state's poorest children. What is more, the state spends $8,000 per student from the $8 billion it has already set aside for students without regard for family income. Thus, the state could fund one million students without increasing funding.

Delk foresees a revolution in the funding of K-12 schools throughout the country, as he cites plans similar to his being discussed in other states. He sees better-educated students, stronger families and fewer outbreaks of the nihilistic violence we have seen in Baltimore. Truth be known, we have seen these outbreaks since the 1960s. They follow a familiar pattern, but they begin with too many young people who are ignorant. Improve education for them, and you improve their job prospects in the 21st century, as Templeton suggested. I think it is worth a try.