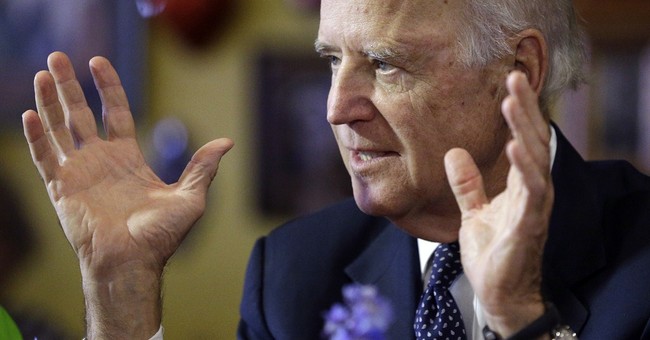 What do you suppose our ebullient vice president says to his sorely pressed staff when he rolls into the office at the end of the day and discovers that, yes, he has done it again? He has committed another verbal blunder, a gaffe as it is called. My guess is that he laughs it off. That is what he does in public. Why should he act any differently in private?

He has been committing gaffes since the beginning of his career. Sometimes they have forced him to cancel a presidential race as in 1988 when he was caught using vivid lines drawn directly from a speech by the British Labour leader Neil Kinnock. Who would have ever noticed, right Joe? Sometimes the gaffes have forced him to make a public apology to one or another foreign power as he did recently with three important allies. Yet most of the time he simply laughs and apologizes while we all laugh along with him. Good old Joe. Remember when he was speaking at the last inauguration to the Iowa State Society Inauguration Ball and he yawped, "I'm proud to be the president of the United States." Good old Joe.

Of course we never were so forgiving when Dan Quayle misspelled potato or tomato or whatever it was. And we never were so forgiving when Sarah Palin made some geographical observation about Alaska's narrow maritime border with Russia, which, by the way, was an accurate observation. These were taken as major blunders and significant enough to cast doubt on Quayle's and Palin's suitability for the vice presidency. Yet good old Joe keeps on filing his balderdash. Remember when he notified Katie Couric that "When the stock market crashed, Franklin Delano Roosevelt got on television and ... " doubtless did something wondrous. Maybe FDR pulled a rabbit out of a hat. Possibly he juggled several balls in the air. Joe's statement was nonsense. Yet Katie nodded gullibly.

Now, however, Joe may be entering treacherous waters. His verbal lapses have recently been more serious than just expounding on an improbable televised event with FDR or identifying himself as president to Iowa's easily befuddled Democrats. He has, in the last few days, accused America's allies of aiding or funding al-Qaeda-linked groups in Syria. The allies were Saudi Arabia, Turkey and the United Arab Emirates. His supporters claim that his statements were imprudent but that they have the advantage of being true. Actually they were probably not true or at least not currently true. Saudi Arabia, Turkey and the United Arab Emirates have recently shown a willingness to edge closer to the United States in its aerial war with ISIS. There seems likely a political realignment in the Middle East involving the moderate Arab states and even Israel.

Still, Joe is just one of a whole generation of Democratic leaders who are angling toward the presidential nomination despite their personal record of ineptitude and scandal. Another is Hillary Rodham Clinton, whose most recent achievement as secretary of state is Benghazi. Ponder her recent book tour. Some 600,000 books have been returned to her publisher. Her public statements have been disastrous: telling the media that when she and Bill left the White House they were "dead broke," taking $275,000 lecture fees often from state universities and all those "complications" at her and Bill's and now Chelsea's foundation. Then there is Secretary of State John Kerry lurking in the bushes. Who else? Howard Dean? Better yet, Elizabeth Warren?

Frankly, gaffable Joe might be the best presidential nominee the Democrats have, though this week there emerged a Democrat who strikes me as a normal, candid, and public-spirited. He is the former head of CIA and secretary of defense, Leon E. Panetta. This week he has come out with a book, "Worthy Fights: A Memoir of Leadership in War and Peace." In it, he respectfully takes issue with his president. He opposes the withdrawal of American forces from Iraq in 2011. He opposes President Barack Obama's failure to intervene in Syria's civil war. He wishes the president had not reversed himself on his decision to attack Syria for its use of chemical weapons on his own population. Panetta strikes me as a reasonable man. He has been a member of Congress. He served as Bill Clinton's budget director and chief of staff, so he has been through difficult times. He is 76 so he is seasoned, and he entered public life as a moderate in the Nixon administration. He is not as much fun as Joe, but no candidate can be blessed with everything.

Matt Vespa
WATCH: Schumer Blocks National Security Briefing, as Revenge for SCOTUS Process, or Something
Guy Benson
Strategy: Should Senate Republicans Hold a Confirmation Vote Before or After the Election?
Guy Benson