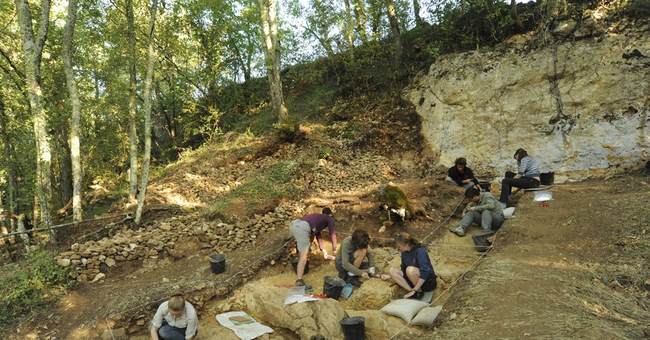 WASHINGTON -- When I read the other day about those cross-hatched engravings found by archaeologists in Gorham's Cave in Gibraltar being "the first known examples of Neanderthal rock art," I, of course, thought immediately of Rolling Stone magazine. Rolling Stone, the magazine for modern aesthetes, covers "rock art" ceaselessly. That a Rolling Stone writer might have found modern rock's roots among Neanderthal man came as no surprise to me. What about punk rock? What about grunge? I believe the word is grunge.

Yet I had leapt to a hasty conclusion. The report I was reading about in London's Daily Mail was not drawn from Rolling Stone but rather from the journal Proceedings of the National Academy of Sciences. And it was not about the artistic aspirations of rock singers, but rather about artists who really were scribbling on ancient rocks over 39,000 years ago, artists drawn from the species Homo neanderthalensis, a species of human much like us only less intellectual.

As to their artistic aspirations we can only speculate, but as to their art there is no question, at least not in the mind of Dr. Clive Gamble, an archaeologist at the University of Southampton who adjudged, "Any discovery that helps improve the public image of Neanderthals is welcome." Apparently Neanderthals have heretofore had an image problem down through the ages.

According to the Proceedings of the National Academy of Sciences, Neanderthal man (and presumably woman) attempted to communicate artistically with their peers by scratchings on stone, and now, thanks to the industry of these devoted archaeologists, we are in possession of some of these priceless works of art, stones that are in essence cross-hatched engravings. Perhaps we shall eventually find stones with squiggles. Possibly we shall find stones with primitive faces. At any rate, these stones are doubtless the first artifacts on the road to Auguste Rodin (1840-1917) or more recently Henry Moore (1898-1986). Though this was not mentioned in the report in Proceedings.

At first, I was skeptical about these findings. It occurred to me that some miscreant might have been having a little fun at the expense of our earnest archaeologists. Some cut-up might have gone into Gorham's Cave surreptitiously, scratched a few lines on an old stone, and left it out there where even a trained archaeologist could not miss it. Or perhaps the stones were the leavings of a performance artiste or a lunatic.

Yet no, these archaeologists are serious and rigorous in their tests. They had not been duped. They had done chemical analysis of the stones and their grooves or cross-hatched engravings, as they are called. They had, as the Mail reports, "shrunk photographs to microscopic scale to see the tool marks [used by the Neanderthals] within the engraving and then compared them with experimental marks made with various tools." They are convinced. The detritus at Gorham's Cave is no hoax.

Yet is it really art? How would it stand up to today's geniuses? Would it be mistaken for the work of Jackson Pollock? I have seen the cross-hatched engravings of 39,000 years ago. I think it would stand up.

Or push the question to the outer limits of contemporary art. How would Neanderthal art be judged against Andres Serrano's "Piss Christ," which depicts a crucifix in a glass container of Andres' own urine? Or how would it compare with the work of Chris Ofili that incorporates elephant dung among other substances?

I am no expert. I really cannot say. I do know that Neanderthal man's sloped forehead suggests he had a very primitive brain. I doubt that Ofili and Serrano have that excuse.