Golf Is Not the Answer 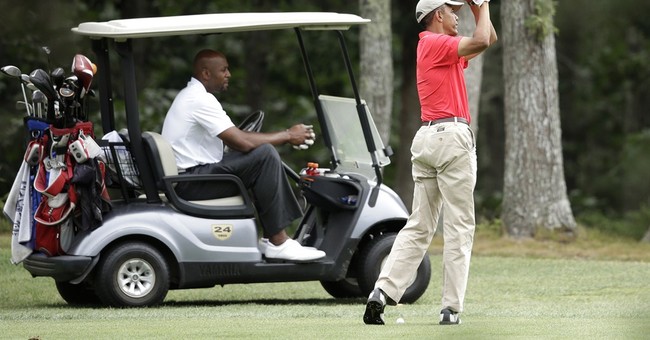 Trending
WASHINGTON -- Immediately after his telephone call consoling the Foley family on their son's grisly murder at the hands of Islamofascists, President Barack Obama took a powder. He headed for the golf course. Yes, the golf course! He had golfed eight times in 11 days, as the world was in tumult the likes of which we have not experienced since the late 1930s. There is something very odd about this man. He seems to think he can duck his obligations by lolling on the golf course. Does he believe no one is looking?

In his brief life, my guess is, he has been posing all along. He had no role model as a father. He had no lasting role model as an adult. Now he has to produce. No one else can serve as his hidden advisor. He has to lead and he has not a clue as to what to do. Thus, to the golf course he goes, no matter how his critics complain or how a growing number of journalists express their dismay.

As he swings his driver and puts his putter, the press seems to sense something is amiss. Yet even the sensible minority in the press corps does not know quite how to respond. Out there on the golf course the president is displaying his emptiness. There has never been such a display of presidential emptiness in American history. Moreover, it is taking place just as the world is gravely menaced by a threat that is at best ambivalent towards destroying the world in the name of Allah. Its adepts have the money and the manpower to strike the modern world a deadly blow. All they need is a bomb. Will they get it?

When communism posed a lesser threat to the world, but a threat nonetheless, we had a range of presidents from President Harry Truman to President Ronald Reagan who had the character and the principles to deal with the threat. They were attended by staff, and for that matter a leadership class, that was up to the task. Today we have President Obama attended by Valerie Jarrett. I think I would like to call for a special election here and now, but quite possibly the President would pull together his old coalition and win again. Some coalitions never learn from experience.

President Bill Clinton could count on the support of his episodic apologists in the press corps. They have always gone through a cycle for him of high expectations, great indignation (owing to an invariable Clinton scandal), and then hope renewed. Even after Monica Lewinsky, and after Pardongate, it took the press only about a year to reach the point of hope renewed. Of course it took the Democratic rank and file much longer to reach the stage of hope renewed. Even in 2008, Bill's endorsement of a candidate was usually the kiss of death. Think of Hillary. But as for the press, most episodic apologists came back to Bill within a year.

Nothing like this has happened with President Obama. He, despite his alleged charisma, is not likable, at least not with the press and not with the Democratic big wigs. They at first thought his candidacy was very historic and they expected to like him. Yet, unlike President Clinton, there was very little joshing it up with President Obama. Nor has he been amusing. In fact, he is condescending. That never ingratiates a politician to the press. Furthermore, there is his record. It has been relentlessly alarming.

For one thing the economy never bounced back, and we have suffered through the weakest recovery of modern times. This is the New Normal? Then there was the roll out of Obamacare. It was a disaster, and Obamacare continues to be a disaster. No one knows what to expect of its outcome. Finally, there have been scandals accumulating around the president, for instance, the VA scandal, Benghazi and the IRS scandal. When will they reach a critical mass? And now there are the foreign policy botches. From Russia and Ukraine to the Middle East, to Africa, and let's forget not the American border, and those ominous noises from the Orient. All this is deadly serious. As I say, I cannot think of anything like it since the late 1930s, though there is no Hitler out there. Only numerous Mussolinis, and this new threat to world peace, Islamofascism.

Something is amiss at 1600 Pennsylvania Ave. I think the mainstream press is aware, but what can they do? We are stuck with another two and a half years of golf.