Marijuana vs. Scotch and a Low IQ 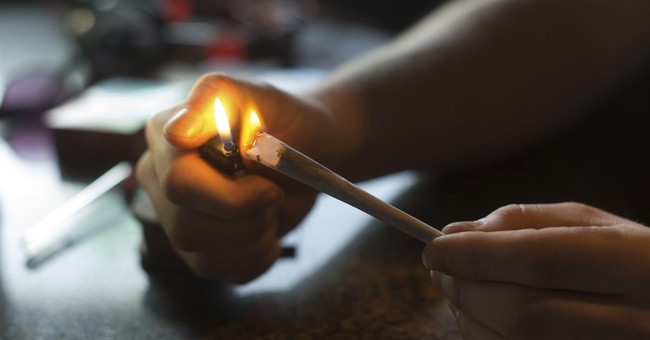 WASHINGTON -- Turning once again to what the sociologists call "coping mechanisms": There is marijuana and then there is alcohol. They are increasingly the civilized options.

Consider alcohol. Consider a suave scotch and soda. One does not sit down to a scotch and soda to get blitzed, unless one is a veritable drunk. One sits down and sips a scotch and soda while conversing with friends. Perhaps one reads a book. One enjoys the scotch for the taste. With scotch there are scores of different tastes. One drinks a single malt. One drinks a blend. The same is true with bourbon and all manner of alcoholic drinks. One imbibes for the taste, then for the refreshment, finally for the relaxed feeling it imparts. Very, very finally, some drinkers drink a scotch and soda to get blitzed and drop out. Maybe the pathetico drinks to pass out or to throw up. A true alcoholic is a sad spectacle. A drunk is a person who has ruined many a good drink.

Consider the increasingly civilized option, marijuana. One smokes a joint to get stoned and steadily to dropout. Is that really civilized? I have never heard of a connoisseur savoring a joint for the taste. One smokes it for the effect. One takes it in a brownie or cookie for an even more immediate effect -- sometimes a deadly effect. Colorado, which has legalized recreational marijuana, has already reported at least two casualties and many more hospitalizations. Possibly the marijuana smoker becomes more convivial at first, but mainly one becomes steadily more isolated, more alone. Is this really civilized? A pot party, as opposed to a cocktail party, can be a pretty gray affair. With contemporary marijuana, the tetrahydrocannabinol (THC) rate, that is to say the psychoactive ingredient in the drug, is about 15 percent higher than it was in the 1960s or 1970s. The increased level of THC makes the drug at least five times more powerful and brings with it increased medical problems. This little known fact hints at how widespread our ignorance of marijuana really is during the current debate about marijuana, or I should say the current non-debate?

Recent polls indicate increased tolerance for a drug that until recently was considered malum prohibitum across the nation. In January, a CNN/ORC International study found 55 percent of Americans favoring legalization of marijuana. Most consider it harmless. I would not be surprised if they adjudged it less harmful than scotch and soda. Yet, in a very instructive piece in the Wall Street Journal, former drug czar William J. Bennett and attorney Robert A. White wrote that "while almost all the science and research is going on one direction -- pointing out the dangers of marijuana use -- public opinion seems to be going in favor of broad legalization." In sum, the studies show that in teenagers and young adults regular use of marijuana -- which means about once a week -- leads to cognitive decline, poor attention and memory, and a decline in IQ of about six points -- and our young people's IQ rates are low enough already. This mental impairment seems to last for years. One study found that teenagers who smoked marijuana daily developed abnormal brain structure. Moreover, there are psychiatrists who for years have argued that extended use of marijuana was linked to psychosis and to permanent brain damage.

Possibly these findings might bear on Michael Brown's erratic behavior in Ferguson, Missouri before his tragic death. We know that the 6' 4," 292-pound teenager was at least on marijuana. We know that 10 minutes before he was shot, he robbed a liquor store of cheap cigars. And, at least some of us know, that those Swisher Sweet cigars are used as a conduit for ingesting a mixture of PCP and marijuana. My guess is that Brown's senseless death was brought on by what the psychiatrists mentioned in the above paragraph have referred to as psychosis and permanent brain injury.

Yet, marijuana, despite these findings is increasingly considered the civilized alternative to moderate use of alcohol. How can this be? How can a country that has recently driven out tobacco -- whose problems most people were well aware of -- suddenly legalize a drug found to be so dangerous by modern science? Lung disease is terrible, but mental health disorders are arguably worse and they occur across a wide range of human behavior.

My answer is weariness. We have been fighting marijuana and other drug use for years, and it seems to me the country is fatigued with throwing up the same arguments. They are valid arguments, but many fellow citizens, especially the young, are tired of them. Another way of saying it is that Americans have become bored by the subject. So, as Colorado goes so goes America, and recent events in Ferguson, Missouri may just be just a harbinger.