In the Middle East, a New Alignment Being Born? 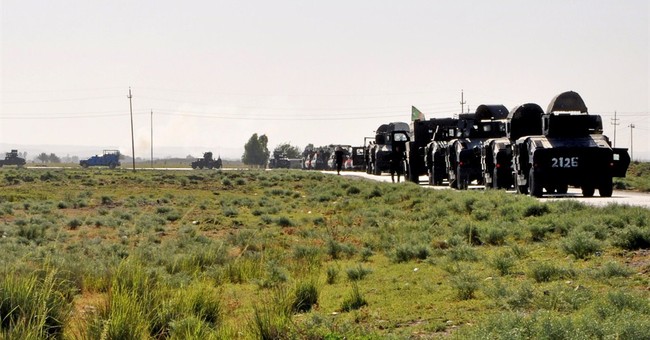 Trending
WASHINGTON -- It did not take all that long, when you think about it, for America's Nobel Prize-winning statesman to bring the world to a boil. Perhaps our Nobel Prize-wining president was only a community organizer all along. He has brought the world to a boil not by his use of force but by his inattentiveness. He has been playing golf or lecturing the world from a higher plain. He has been picking fights with the Republicans or devising new ways to thwart the Constitution. He has not reacted to provocations around the world that threaten peace and our allies. The allies are beginning to worry.

The president has simply failed to respond to an outburst of violence around the world. It is an outburst that has not been seen since the 1970s. His only reaction is mere rhetoric, sometimes no rhetoric at all. Sometimes he changes the subject. Whether it be mobs of Central American children at our southern border or armed rebels in Ukraine shooting commercial aircraft out of the skies, there is only emollient talk from Washington. There is no alternative policy. Things are getting worse.

Last week at a White House press conference, as the Middle East was blowing up and violent outbreaks were reported around the globe, the president's press secretary, Josh Earnest, made the stupefying claim that President Barack Obama's foreign policy has actually increased the world's "tranquility." In response to a journalist's question about the "breadth of global instability," the ironically named Earnest said: "I think there have been a number of situations in which you've seen this administration intervene in a meaningful way, that has substantially furthered American interests and substantially improved the, uh, you know, the -- tranquility of the global community."

What is he talking about, Obama's vaunted red line in Syria? More recently, is he talking about Ukraine where the corpses from a commercial jet lay in an open field for days as a war goes on that could get worse? Is he talking about the Middle East where the Arab Spring has given way to chaos in such countries as Libya, Syria and large areas of Iraq, with the Iranians becoming more truculent and scheming by the day? And they seem to be behind a wide range of Middle Eastern mischief, with the Obama administration offering no push back. Or is the tranquility of which Earnest speaks along the border of Gaza and Israel where the terrorists from Hamas lob perhaps a thousand rockets at Israel. When the enlightened critics derided Ronald Reagan for his Strategic Defense Initiative, thankfully the Israelis did not share in the derision. Now they have their own strategic defense called the Iron Dome to protect them as they launch lethal missiles into Gaza and a ground attack to eliminate Hamas' rats nest of tunnels into Israel.

In the six years that President Obama has governed, the world has become more dangerous than many in America, Europe or the Middle East had imagined. Yet as things fall apart there are signs of hope. The other day when Israel invaded Gaza to close off Hamas's tunnels, an alignment of newly aroused Muslim states committed the heretofore inconceivable. They expressed open support of Israel's actions. They see Hamas as part of a dangerous coalition of violent forces often supported by Iran that could flood into their countries almost overnight. Yet when Washington figures such as Ambassador Ryan Crocker speak hopefully in the Washington Post of these moderates' implacable enemy, Iran, saying it "is no longer whether to work together but how to do so," these Muslim nations are perplexed. What are they to make of America when even relatively conservative people like Crocker suggest a diplomatic demarche with a regime that calls us the Great Satan?

In this time of international volatility, there are emerging surprising opportunities. Is it possible that Egypt, the Gulf States and Saudi Arabia can move closer to Israel? Actually they already have. They call for "stability" in the region, and live in wonder of what the United States is doing conjuring with the greatest force for instability there, Iran. Could it be that the legacy of the Obama years might be a new Middle East alignment of civilized nations with Israel while such backward polities as Syria, the Islamic State of Iraq and the Levant, and terrorists such as Hamas continue to tear themselves apart? All with the conniving Iranians pulling the strings. We live in alarming times but also hopeful times.