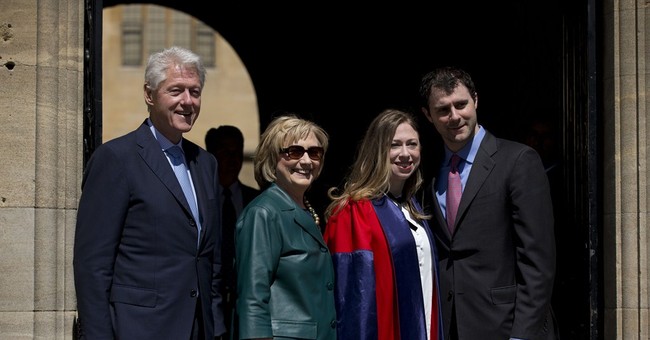 I have been vindicated! For years I have been comparing the Clinton family to the family of Warren Gamaliel Harding, our 29th president and a president of dark memory at least to most liberal historians. For me, Warren was sheer slapstick, as to some degree his modern-day equivalent was, Bill Clinton. And forget not their gruesome wives.

I began my historical comparisons in the 1996 bestselling book, "Boy Clinton: The Political Biography." For years, I punctuated my syndicated column with references to the two families. Then in my 2007 book, "The Clinton Crack-Up," I clinched the comparison in a reminder of how that Little Rock monstrosity, the Clinton Library, compared so favorably with the Harding Memorial in Warren's hometown, Marion, Ohio. But now, you ask, how am I vindicated? Well, America's historical memory is not very strong. Comparing Bill with a 1920s president to a modern American audience was not easy. Yet, by month's end it will be much easier. In fact, the comparison will be inescapable.

On July 29, the Library of Congress is putting on display a goldmine of romantic letters Warren wrote his mistress from 1910 to 1920, Carrie Fulton Phillips. He later had other gals, most notably Nan Britton, while he was president. Yet no letters from these affairs are extant. The Phillips letters are voluminous and very steamy. In fact, one cannot read them without being reminded of Monica Lewinsky's testimony in the Starr Report. They are that salacious. Boy would Warren have had a good time with Monica.

Of course, we only have Warren's reminiscences of his recent assignations with Mrs. Phillips, but that is enough to convey what took place in a dark hotel room or under an elm. He names his private part. I will encourage my readers to attend the Library of Congress exhibit by not betraying my knowledge of it. He names Mrs. Phillips' private parts while describing her other physical attributes. It is my judgment as a presidential historian that nothing quite like the Harding letters have ever escaped from a president's confidence, save the Lewinsky testimony.

As I have written, the comparisons between the Hardings and the Clintons are inescapable. Both the Clintons and the Hardings came from rural parts, albeit Harding had a more exalted pedigree. Both couples included a clever, assertive and forbidding wife who had displayed above-average competence in business and in politics. Both families were compact; the Clintons had one daughter, the Hardings had no children.

Both presidents were personable and charming to the fair sex, whose nicely turned ankles fetched their wandering eyes. When not boldly at the helm of the ship of state, both presidents vigorously pursued the masculine pastimes of their day, golf and poker for Harding, golf and jogging for Clinton.

Harding, of course, was less driven than the Boy Governor of Arkansas and obviously more dignified. He had a better tailor. He seemed to age more gracefully and less abruptly in office until he suffered a heart attack while in San Francisco where he died. Then, too, while alive Harding was freer of scandal. History remembers Harding as an amiable bungler whose scandals were revealed only upon his death. Clinton's blunders began early and the shadows of scandal crossed him earlier still. Moreover there were witnesses to his scandals, a lot of them.

Bill, aside from his scandals and pratfalls, presided over a relatively prosperous and peaceful presidency, owing in part to his cooperation with Republicans, particularly Newt Gingrich's House of Representatives. Remember his boast that "the era of Big Government is over"? Surprisingly, today we recall Warren's presidency as prosperous and peaceful, too. Amity Shlaes, in her book, "Coolidge," recalls that he cut taxes, cut federal spending, got the economy going again and ended his predecessor Woodrow Wilson's excessive regulation of the economy. Also he endorsed African-Americans' rights.

So I am vindicated in my comparison of Clinton and Harding, and one other thing. I would welcome either of them back in the White House today to replace Barack Obama, who is not very funny.