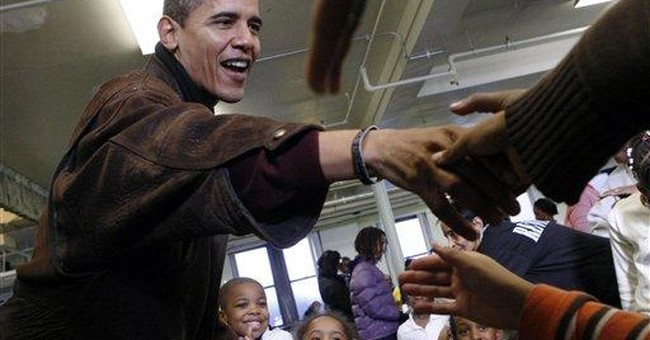 WASHINGTON -- There is a condign symmetry about this financial crisis. A government-induced crisis is getting a government-insured resolution. The excesses of Freddie Mac and Fannie Mae are being mopped up by huge federal spending, made all the more massive by all the reckless endeavors of the politicians, the regulators and the financiers who frivoled with the intemperance of Freddie and Fannie. Now President-elect Barack Obama has perhaps faced up to the mess. He has not shied away from bringing former Secretary of the Treasury Larry Summers onto his economic team as head of his National Economic Council.

Summers was a proper critic of Freddie and Fannie, having noted this past summer that "the illusion that the companies were doing virtuous work made it impossible to build a political case for serious regulation." This virtuous work was extending mortgages to those who could not afford those mortgages. The toxic mortgages were then bundled in with healthy mortgages and sold around the world by Wall Street geniuses like some enormous chain letter whose day of reckoning came some months ago.

The endeavor was a fantasy that had to end badly, and so it has. Yet at a certain level, the constituent elements of the Democratic Party are given to fantasy and excess. Consider the most vocal critics of Summers. They are not bankers or economists. They are feminists, often feminist scientists, who forced him out of the presidency of Harvard for his recognition that women of genius are not as plentiful as men of genius in the sciences and math. Now, what he cited is a fact. Summers drew no invidious conclusions and offered no program that would limit the number of lady scientists. He just noted the data in a forum supposedly open to free discourse. Kaboom -- the women of the fevered brow drove him from office. Remind me not to read a book aloud in Harvard Yard.

Now, in this time of economic crisis, the women of the fevered brow attempted to keep Summers out of the Obama government despite his demonstrated economic acumen. And remember these feminists claim to be a force for justice and fairness. How long do they want to ban Summers from public life?

It was rumored that Obama wanted Summers back as head of Treasury. Perhaps the angry feminists kept Summers out of his old office. The man the president-elect has announced as his secretary of treasury, Timothy Geithner, is probably a suitable replacement. The economic team Obama is assembling strikes me as pretty good, but the way it was assembled is a bit worrisome. Are all the fanatics in the Democratic Party going to be able to get a hearing with this president? He is going to have to maintain both feet on the ground in the months ahead. The delusional malcontents that a Democratic presidential candidate courts in an election can cause a Democratic administration grave problems.

That brings to mind the visuals that the president-elect is using when he addresses the American people. He appears enhaloed by American flags, not one or two but a whole ring of flags. Moreover, he speaks from a lectern proclaiming "The Office of the President Elect." In point of fact, there is no Office of the President Elect, and Obama is not even in an office. He is on a stage. Arguably, a stage has been his office during much of his public life, given the fact that he will be America's first motivational speaker to become president. Actually, I doubt that this is the point Obama is trying to make. He is engaging in theater. Yet this dramatic setting is implausible. According to statute, he will not actually be president-elect until the Electoral College meets on the first Monday after the second Wednesday of December (Dec. 15 this year) to elect him according to the votes cast Nov. 4.

My advice to our incoming president is to avoid the implausible stage effects. There is plenty of drama out there, for instance a real war and a real economic crisis. Now he has appointed former Federal Reserve Chairman Paul Volcker to be chairman of a new presidential advisory board to oversee our emergence from this economic mess. Volcker is one of the great figures of his generation, known for slaying inflation in the early 1980s and a dozen other contributions to the commonweal. It is a sign that our first motivational speaker president might actually know what he is talking about -- when he is talking seriously.

Live at 9 p.m. ET: The brawl to settle it all
Hotair
Winners and Losers of the Las Vegas Democratic Debate
Redstate