Toward a More Muscular Missile Defense

Ed Feulner
|
Posted: Aug 16, 2017 12:01 AM
Share   Tweet
The opinions expressed by columnists are their own and do not necessarily represent the views of Townhall.com. 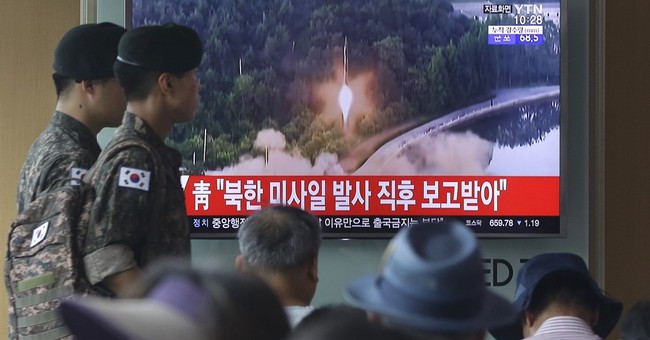 An air of fatalism surrounds much of the coverage of the escalating tensions between North Korea and the United States. If Pyongyang launched a missile at us or at one of our allies, the feeling goes, we could do nothing but brace ourselves for catastrophic damage and loss of life.

Which makes this a good time to ask: What’s the state of our missile defense?

The good news, we have a system in place. We could shoot down an incoming missile. The bad news? The system isn’t as capable as it could or should be. Fortunately, we can do something about that.

First, though, let’s look at what North Korea has, and what kind of missile defense we have right now.

North Korea boasts a very active nuclear-weapons program. The country has faced decades of sanctions, and the communist leaders in Pyongyang have inflicted an enormous economic toll on its population. Yet North Korea has continued to develop long-range ballistic missiles for a long time.

Its goal, as missile-defense expert Michaela Dodge reminds us in a new paper, is apparently to threaten the U.S. homeland. It is already capable of threatening U.S. allies in South Korea and Japan, as well as American forces stationed in those countries. Such a situation is clearly untenable.

“It is increasingly obvious,” Dodge writes, “that the Kim Jong-Un regime will not voluntarily give up its nuclear weapons program, which leaves the United States with an option to either be vulnerable to the whims of an unpredictable totalitarian dictatorship or find ways to defend its way of life as well as its allies.”

That defense rests in large measure on a Ground-Based Midcourse Defense (GMD) system, which remains the only missile-defense system we have capable of shooting down long-range ballistic missiles headed for the U.S. homeland.

The U.S. GMD system is the only one we have capable of intercepting an ICBM (inter-continental ballistic missile) in the mid-course phase of its flight. The United States currently deploys four interceptors in California and 32 in Alaska. If all goes according to plan, those 36 will increase to 44 by the end of this year.

We also have systems capable of shooting down shorter-range missiles, as well as our sea-based Aegis system. Aegis can target short- and intermediate-range ballistic missiles. But with the threat of longer-range destruction from Pyongyang and elsewhere growing, it’s time to focus on how we can increase the amount of protection we have.

Increasing the number of interceptors in our GMD system certainly leads the list. As Dodge notes, 44 should be a minimum number. But the current budgetary plan doesn’t allow for us to maintain those 44 into the 2020s. We obviously need to allocate the necessary funds for that -- and sooner rather than later.

But that’s not enough. We also should invest in space-based interceptors (which are far better equipped to shoot down missiles in their initial “boost” phase, when they are moving more slowly) and in future missile-defense technologies. Some of these technologies were scaled back under President Obama, but the current situation with North Korea strongly suggests it’s time to change that.

Of course, North Korea isn’t the only threat out there. Its saber-rattling rhetoric often draws the most attention, but Iran also has a large arsenal of ballistic missiles, and its nuclear program is quite active. And Russia and China have plenty of ballistic missiles on hand. The need for a more robust U.S. missile defense becomes more pressing all the time.

We’ve come a long way from the days of Mutually Assured Destruction. The Anti-Ballistic Missile Treaty tied our hands for three decades. We’ve beefed up our missile defenses quite a bit since then, but much more needs to be done.

There are plenty of places in the federal budget where we can cut. But security isn’t one of them. It’s time to make our missile-defense system more muscular.