Ed Feulner
|
Posted: May 24, 2017 12:01 AM
Share   Tweet
The opinions expressed by columnists are their own and do not necessarily represent the views of Townhall.com. 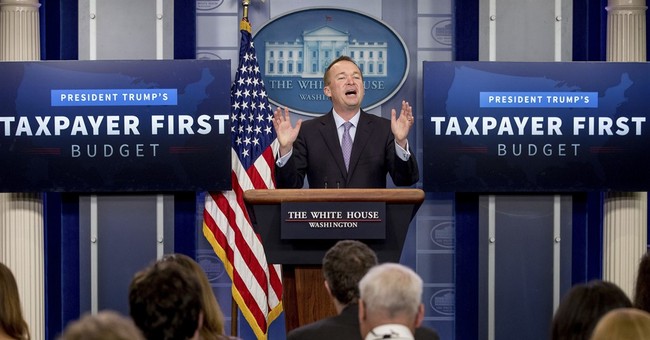 We’re used to hearing politicians vow to cut spending. We’re also used to them not following through.

So it’s hard to blame voters for feeling cynical. Year after year, their elected representatives kick the can down the road. They pass continuing resolutions -- Washington-speak for “business as usual.” Then the next campaign starts, and so do the promises.

Meanwhile, the sky doesn’t fall. Should they even worry?

In a word, yes. As the annual budget battle in Washington gets underway, it’s time to remind ourselves (and the politicians) about the price of inaction.

President Trump inherited a national debt of nearly $20 trillion. Simply put, that is how much more the federal government has spent than it’s taken in.

It’s easy to glaze over that number, but remember that one trillion is twelve zeroes. For perspective, consider this: If you had a stack of $1,000 bills that added up to $1 million, it would be four inches high. $1 billion would be 364 feet high. $1 trillion would be about 63 miles high. Now multiply that by 20, and you have our national debt. It’s an enormous sum.

Still, you may say, things keep humming along. You’ve been hearing gloom-and-doom predictions for years, and perhaps you’ve come to ignore them. But you shouldn’t.

Running constant deficits is a mistake not because things will suddenly turn horrible overnight, but because they gradually get worse. So we keep looking the other way -- until we’re hip-deep in crisis mode.

And make no mistake, that’s where we’re headed if Congress and the president can’t finally crack down and get spending under control. That means not only making serious cuts – it means reforming Social Security and federal health programs, which are the real drivers of our ballooning deficits.

Indeed, warns federal budget expert Romina Boccia, without such reforms, nearly 85 cents of every additional dollar in spending over the next 10 years will be consumed by Medicare, Medicaid, Social Security and interest on the debt.

Our current spending path isn’t merely unwise. It’s unsustainable. We haven’t hit the wall yet, but we’re advancing toward it quite rapidly.

Boccia calls it a “silent crisis” -- the kind of thing that Japan (which is about 20 years ahead of us) is going through. It’s getting harder and harder to avoid it, but it can be done. Provided, of course, members of Congress are willing to put their political differences and pet projects aside to work with President Trump to return accountability to Washington.

Another reason to tame out-of-control spending is because of how it feeds the size of government. As Boccia writes:

“Smart cuts can ‘drain the swamp’ by weaning special interests from feeding unfairly from the federal trough. They can also streamline the bloated federal bureaucracy and empower the private sector — as well as states and localities — to absorb functions the federal government has improperly usurped.”

That’s a key concept, though: “smart cuts.” Congress has tried across-the-board cuts before, but that’s a mistake. Some departments are infected with far more wasteful spending than others. And some have absorbed too many cuts already -- most notably, defense. Our military has been trying to protect us on the cheap for several years now, leading to a readiness crisis that has left our military stretched thin in many parts of the world.

It will take time and effort to root out wasteful spending and restore the federal government to its proper size. But when you consider the result -- not only an averted crisis, but a stronger, freer, more vibrant economy -- the only question for our elected representatives is: Why are you taking so long to get started?