SDI at 34: Building on Reagan’s Vision

Ed Feulner
|
Posted: Mar 23, 2017 12:01 AM
Share   Tweet
The opinions expressed by columnists are their own and do not necessarily represent the views of Townhall.com. 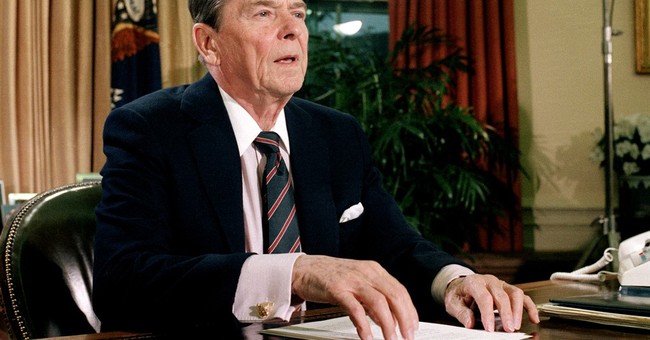 When a politician promises something that “holds the promise of changing the course of human history,” we naturally assume it’s a typical overstatement. But when President Ronald Reagan said that on March 23, 1983, in reference to his Strategic Defense Initiative (SDI), he was exactly right.

His speech that day introduced Americans and the world to SDI, a comprehensive, layered ballistic missile-defense program designed to protect the United States and its allies from a threat that had bedeviled it for more than 20 years. It marked a true turning point in our adversarial relationship with the Soviet Union.

The Heritage Foundation was privileged to lay the visionary groundwork that led to Reagan’s historic announcement. The year before the president’s SDI address, the Foundation published its first missile-defense study, “High Frontier: A New National Strategy.” The study proposed a comprehensive system, including laser weapons capable of intercepting Soviet missiles as they were launched or while they travelled in space toward the United States.

The study was driven by a gap in U.S. defense posture: While we could track the incoming missiles, we were completely unable to do anything about them. Such vulnerability was completely unacceptable to the new commander-in-chief.

President Reagan’s new policy was truly visionary. At that point, most of the country’s policy-making elite considered Mutual Assured Destruction (MAD, appropriately enough) an acceptable policy to deter the Soviet Union. MAD relied on maintaining devastating second-strike forces, meaning that even if an enemy attacked the United States first, enough U.S. nuclear forces would survive to inflict massive casualties to that enemy.

Most policymakers believed MAD was enough to ensure the Soviet Union would never attack, and that any missile defenses could upset the delicate balance of assured destruction. Additionally, many scientists believed that missile defense was impractical because it was too technologically challenging.

President Reagan was skeptical of the MAD doctrine. He also didn’t believe missile defense was impossible for the nation that had succeeded in putting a man on the Moon more than a decade earlier. The “human spirit,” he said, “must be capable of rising above dealing with other nations and human beings by threatening their existence.”

MAD was problematic during the Cold War, partially because the Soviets never accepted its premises and planned on winning a nuclear war. But it serves us even less today. The theory of assured destruction has grown completely irrelevant to challenges the United States has faced since the Cold War ended.

Adversaries and potential adversaries have chosen to exploit U.S. vulnerability and invested heavily in ballistic missiles, as well as programs researching and developing lethal payloads for them. As Heritage has continued to emphasize, the threat from ballistic missiles is only 33 minutes away.

Building on President Reagan’s legacy, the United States slowly woke to the ballistic-missile threat, withdrew from the Anti-Ballistic Missile Treaty that prohibited missile-defense deployments in 2002, and started an initial missile-defense program designed to protect the country, forward-deployed troops, and allies from primarily Iranian and North Korean ballistic missiles. With a track record of successful intercepts, the U.S. missile defense program has proven its critics wrong.

But a lot more work remains to be done, especially since the program was hampered at times by the Obama administration. The new administration must invest in space-based missile-defense interceptors, as envisioned under SDI. We must develop and deploy directed-energy weapons, building on the research and development legacy of the SDI program. With ballistic missile-defense technologies becoming more available, the task is more urgent than ever.

Thirty-four years ago, Ronald Reagan described a visionary goal to help secure our country. Now we must build on his vision -- and ensure that we have a viable missile defense capability that protects us all well into the future.