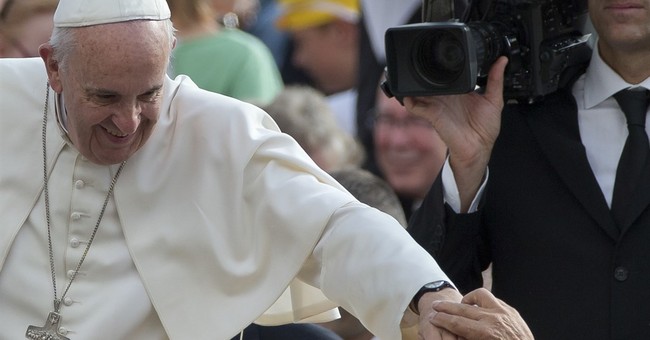 To say that Pope Francis’s visit to the U.S. drew a lot of media attention would be an understatement. The coverage was round-the-clock. Yet as a lifelong “cradle Catholic,” educated by Jesuits, I couldn’t help noticing what a remarkably incomplete, if not misleading, portrait emerged of the Holy Father.

Ask most people what issues concern the pope, and they’ll likely cite immigration and climate change. And yes, he has discussed them on many occasions, at times using terms that have led some liberals to declare the pontiff is a card-carrying socialist with little patience for allegedly “outdated” traditional church teachings.

Some context is in order. Those rushing to crown the “people’s pope” as some sort of revolutionary have overlooked certain important points.

Look at what Pope Francis said to Congress. He didn’t scold. He urged lawmakers to build on our great history, to draw from our deepest principles. He reminded us of the good we’ve done in the past, which serves as an example of the good we can and should do in the future:

“Our efforts must aim at restoring hope, righting wrongs, maintaining commitments, and thus promoting the well-being of individuals and of peoples. We must move forward together, as one, in a renewed spirit of fraternity and solidarity, cooperating generously for the common good.

“The challenges facing us today call for a renewal of that spirit of cooperation, which has accomplished so much good throughout the history of the United States. The complexity, the gravity and the urgency of these challenges demand that we pool our resources and talents, and resolve to support one another, with respect for our differences and our convictions of conscience.”

Hardly the call to overthrow the system that the pope’s more radical-minded fans would have us believe. Instead, he is asking us to call on all that is best, good and true in our society as it is currently formulated. As Cristina Odome of the Legatum Institute has written, his complaint is less with capitalism and more with consumerism.

What we need is capitalism that follows the Golden Rule. Hence the Holy Father’s laudable emphasis on that core teaching by Jesus. It’s a simple, perfect test: Is what you propose to do to others what you would have them do to you? If not, don’t do it. Use your God-given freedom to treat everyone, including the unborn and the elderly, with compassion and fairness.

Another overlooked papal prescription: “subsidiarity.” Francis used this SAT word twice in his address to Congress. Few bothered to dwell on it, but they should have. As Emily Zanotti wrote for the American Spectator:

“Subsidiarity is the concept which, loosely, entails assigning care for various societal ills to the level of community that is best suited to address those ills. For instance, the family is the first line of defense, and what it cannot solve can be solved by community organizations. What those cannot solve alone can be solved in communion with local and state governments. Only when no other level of government is equipped to handle a societal ill does it become the problem of the Federal government.”

The pope was also emphatic in his support for religious freedom. This did not go unreported, of course, but it bears repeating: “Religious freedom certainly means the right to worship God, individually and in community, as our consciences dictate,” he said in Philadelphia. “But religious liberty, by its nature, transcends places of worship and the private sphere of individuals and families.”

This remark followed his visit to the Little Sisters of the Poor, an order that cares for the elderly poor. The Sisters have filed a lawsuit against the Obama administration to fight its mandate that employers provide coverage for birth control and abortifacient drugs in their health insurance plans. Fr. Federico Lombardi of the Holy See Press Office, called the visit “a sign, obviously, of support for them” in their legal battle.

And let’s not forget how tremendously heartening it was to hear him say this to Congress: “How essential the family has been to the building of this country! And how worthy it remains of our support and encouragement!”

Perhaps his most important words were his closing ones: “God bless America.” Only a nation so blessed, as we have been in the past, can fulfill our great potential.

I’m not so sure the media knows that. But Pope Francis does.