Riding a Tide of Red Ink 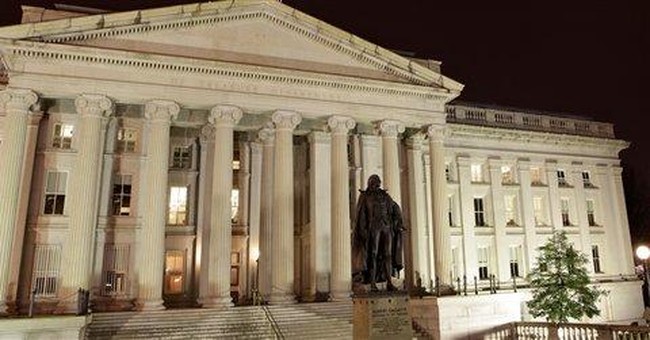 It’s no secret what the average American family does when income drops: Spend less and save more.

In fact, we’ve seen just that during these last two recessionary years. The personal saving rate, barely 1 percent of income in the first quarter of 2008, reached 5 percent last year and remains above 3 percent.

Businesses are doing the same thing. The Washington Post reported recently that non-financial companies are carrying some $1.8 trillion on their books, about 25 percent more than at the start of the recession.

This is partly because of federal meddling in the economy. With Obamacare heading their way, opaque financial regulations about to take force and lawmakers still contemplating a cap-and-trade law, companies figure some cash on hand can’t hurt -- if only to pay for new government-mandated rules. But they’re also holding on to some cash because that’s the logical approach thing to do when dealing with economic uncertainty.

So why this hasn’t this wisdom trickled up to national leaders?

Our federal government is on a sending spree unheard of since World War II, when Washington poured resources into a two-front battle the country couldn’t afford to lose.

“These future deficits are driven almost exclusively by rising spending,” notes budget expert Brian Riedl of The Heritage Foundation. “President Obama’s budget would push inflation-adjusted federal spending past $36,000 per household by 2020 -- $12,000 above the level that prevailed under President Bush.”

This year the federal government is borrowing 41 cents out of every dollar it spends. Instead of saving up for future generations, we’re spending money our offspring haven’t earned yet, and leaving them with nothing but bills and (in the Social Security trust fund) IOUs.

Even the experts admit they have no idea where this tide of red ink could carry our economy. “The United States may be able to issue more debt (relative to output) than the governments of other countries can, without triggering a crisis, because the United States has often been viewed as a ‘safe haven’ by investors around the world,” notes a recent report from the non-partisan Congressional Budget Office.

“On the other hand, the United States may not be able to issue as much debt as the governments of other countries can because the private saving rate has been lower in the United States than in most developed countries, and a significant share of U.S. debt has been sold to foreign investors.”

To paraphrase: Nobody knows how long this can go on. Yet as an economist once said, anything that must come to an end, will. Eventually foreign investors will realize the American government is carrying too much debt, and they’ll stop lending it more money. Before that happens, our leaders need to get spending under control.

Obama has appointed a commission to suggest ways to tame the nation’s deficit. It’s scheduled to report, conveniently, after the November midterm elections. Riedl writes that the commission should recommend that Congress:

Americans are behaving responsibly. We’ve tightened our belts and prepared for an uncertain future. Why can’t government?