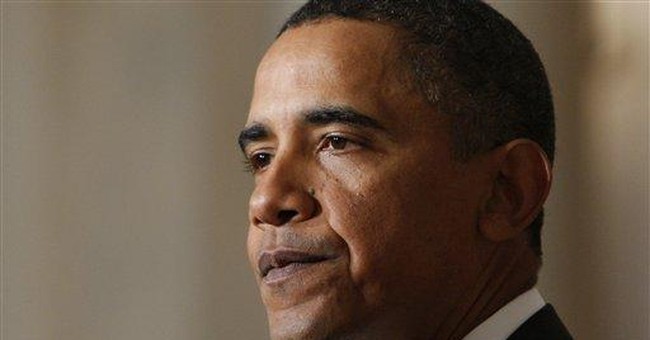 In 2010, Americans should demand that our leaders be followers. They ought to do what the rest of us are already doing.

Let’s begin with spending. According to a poll conducted by Consumer Reports magazine, two-thirds of Americans planned to reduce their spending on holiday gifts. That made sense in this economy. Unemployment was up, employee pay wasn’t, and people wanted to hang on to their hard-earned money. If only our federal government would do the same thing.

Instead, Washington closed out 2009 by promising to increase spending even more. In one of a December radio address, President Barack Obama declared that his administration would keep trying to “spend our way out of this recession.” Obama wants to throw more federal funding at infrastructure (whatever happened to the “shovel ready” projects we heard about last February?) and create new tax breaks for consumers who invest in energy-efficient retrofits in their homes (“cash for caulkers”).

Keep in mind that the administration’s current spending plans would create as much government debt as every other president from George Washington to George W. Bush. Combined.

Consumer Reports puts things very nicely. “I always tell people to stick with cash whenever possible, because when you have to take money, put in your hand the actual dollars and see them flying out of your hand into the cash register, it makes you much more of a disciplined shopper,” the magazine’s “Tightwad” Tod Marks says.

It’s time for our policymakers to show some of that same discipline, and stop piling up debt that will need to be repaid by our children and grandchildren.

Congress should also follow public opinion on health care. By early December, polls showed little support for the reform bills being raced through Congress. A CNN poll in December showed that a mere 36 percent of Americans supported the Senate’s legislation, while 61 percent opposed it.

In January, members of the House and Senate will have to reconcile the different bills each house passed. But instead, lawmakers ought to agree to just kill both of these unpopular measures and start over, especially since the Senate bill turned into what’s known in Washington as a “Christmas tree.”

“I don’t know if there is a senator that doesn’t have something in this bill that was important to them,” Majority Leader Harry Reid put it just before Christmas. “And if they don’t have something in it important to them, then it doesn’t speak well of them.” Actually, it doesn’t speak well of our elected officials when they’re buying votes with our tax money. They should show some real leadership, start over and draft a reform bill that really helps people.

Finally, nobody likes a tax increase, so Congress should get to work on making the 2001 and 2003 tax cuts permanent. Many of those cuts are set to expire at the end of this year. Unless they’re renewed, lower-income Americans will suffer. For example, at the end of 2010:

• The 10-percent tax bracket would disappear, replaced by a 15-percent rate.

• Taxpayers with children would lose 50 percent of their child tax credits.

It’s seldom a good idea to raise taxes. But jacking them up as the country is struggling to recover from recession would be especially bad and could push us back to the brink of economic disaster.

As this election year kicks off, our leaders would do well to listen to the wisdom of the people -- before they learn it first hand in November.