No Timetable for Victory 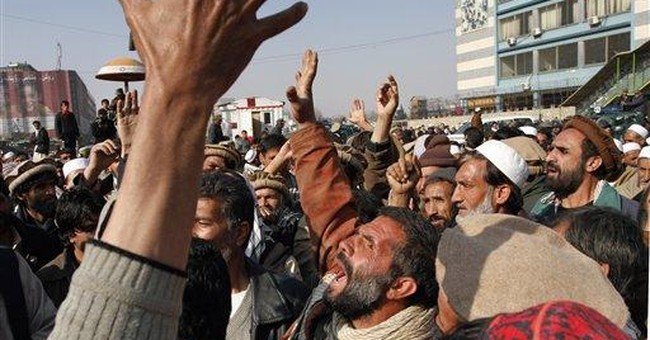 When considering war strategy, it’s best to start where you want to finish. For example: in Afghanistan the United States needs to destroy the Taliban. The question is, how?

In his recent speech at West Point, President Barack Obama authorized sending some 30,000 more American warriors to Afghanistan -- significantly fewer than commanding Gen. Stanley McCrystal had asked for, but a solid step nevertheless.

“We will go forward with the confidence that right makes might, and with the commitment to forge an America that is safer, a world that is more secure, and a future that represents not the deepest of fears but the highest of hopes,” the Commander-in-Chief told cadets.

But the president erred by setting an end date for the deployment. The troops will start coming home in 18 months, Obama said. That’s a mistake, because it gives the Taliban hope that they can simply outwait us. We shouldn’t be setting a timetable for our troops to leave. Instead, we should be explaining what they’ll accomplish. When they meet those goals, they’ll leave, victorious.

“The Taliban will eventually come down from the hills, probably in dribs and drabs, when they’ve been sufficiently pummeled by the combined Afghan National Army and NATO forces, seen their base among the Afghan people undermined by improved governance, and had their sanctuaries in Pakistan squeezed from the East,” former Defense Department official James Shinn told me recently. “This is going to take time.” Our enemies need to know we’re committed to invest that time to achieve victory.

This, after all, is what happened in Iraq. President Bush surged troops in, but didn’t announce when they’d be coming home. Gen. David Petraeus decided to ease back on the surge just a few months later, when our objectives had been achieved and Iraq had been brought back under control.

Obama also showed some misplaced concern about the cost of the Afghanistan operations. Yes, $30 billion is a lot of money. But remember: Defense doesn’t cost -- it pays. The defense budget and our mighty military make everything else the United States does possible.

If, as Obama himself says, we have a “vital national interest” in Afghanistan, then the $30 billion is a reasonable down payment -- especially since that’s a trifling amount beside the $800 billion lawmakers wasted on an ineffective stimulus package and the trillions of dollars the president’s allies in Congress want to throw away on cap-and-trade and nationalized healthcare.

The president also needs to demand more from our NATO allies. Recall that, in the days after Sept. 11, NATO members invoked Article V of their charter, pointing out that the attack on the U.S. mainland was an attack on the entire alliance.

But for years our allies (with the exception of Britain and Canada) have been coming up short on their troop commitments. Most European nations need to deploy more forces to Afghanistan, along with critical enablers such as engineers and explosives experts.

In addition, our allies should remove the limits many have placed on where their forces may be deployed and what they may do. That would give commanders on the ground the ability to determine where combat forces should be deployed. After all, continued micromanaging from national capitals seriously undermines NATO’s effectiveness.