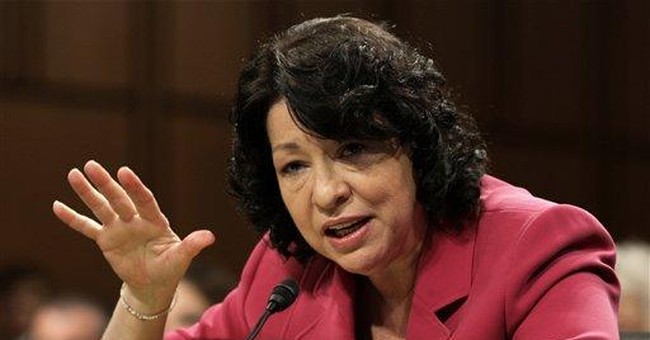 When a Supreme Court justice decides a case, should he or she look exclusively to the Constitution and U.S. laws? Or should foreign policies or laws come into play?

Those are easy questions for most Americans. They know U.S. citizens are subject only to laws made by American legislators -- not foreigners at the United Nations, in Europe or in Zimbabwe.

Yet at least one sitting Supreme Court justice says American jurists should look to foreign precedent. And President Barack Obama’s first nominee to sit on the high court, Sonia Sotomayor, seems a bit unclear on that point, too.

Just two years ago a book titled “The International Judge” featured an introduction she penned. “The question of how much we have to learn from foreign law and the international community when interpreting our Constitution,” she wrote, is “worth posing.”

Earlier this year, Sotomayor spoke to the Puerto Rican chapter of the ACLU. “International law and foreign law will be very important in the discussion of how to think about the unsettled issues in our own legal system,” she told the group.

Both quotes are troubling. Quite simply, there’s no need to consider foreign law when interpreting American constitutional law.

For the Constitution is, by definition, all one needs. And despite its brevity, our Constitution is remarkably effective. As a guiding legal framework, it works far better than longer (and long-winded) documents such as the European Union constitution. Our Constitution’s protection of the freedom of speech, for example, is remarkable, admirable and unique.

Unfortunately, Sotomayor isn’t alone in her consideration of foreign policies. Earlier this year Justice Ruth Bader Ginsberg told a panel at Ohio State University that our Supreme Court ought to pay more attention to the laws and policies of other countries. “You will not be listened to if you don’t listen to others,” she warned.

Well, what does it matter whether jurists in Yemen decide to cite U.S. precedent?

Our founding document was written to create a United States. The laws passed in the 221 years since it was ratified were meant to govern Americans. Anyone who wants to live under Sudanese law is free to move. Yet for more than two centuries, the line to get into the U.S. has been far longer than the line to get out. We’re doing something right.

In a recent paper from The Heritage Foundation, international law expert Steven Groves suggested several questions Sotomayor ought to be asked during her hearings.

§ Do you believe that it is the proper role of a justice of the Supreme Court to decide cases based on whether the decision will influence the jurisprudence of foreign courts? If so, how great a factor should the desire to influence foreign courts play in interpreting the Constitution?

§ By what criteria should foreign decisions be cited? Should the Court really be looking to adopt norms outside of the American tradition when deciding cases regarding controversial “values” issues such as the death penalty and homosexuality?

§ What exactly constitutes the mainstream of human thinking? Since much of American constitutional jurisprudence falls outside of the mainstream, why would we want to allow America’s less republican neighbors in the world community to influence the Court’s decisions?

Over the last several years, The Heritage Foundation has given away more than three million copies of the U.S. Constitution, which Supreme Court justices take an oath to defend and uphold.

Judge Sotomayor needs a friendly reminder that the Constitution -- despite being small enough to slip inside a jacket pocket -- is big enough to govern our continental nation. And her job, if the full Senate approves her, would be to consult that document for guidance, not foreign laws or policies.

Senators should press Sotomayor to explain her stance on the use of foreign law -- and pay close attention to her answers.