A Two-Step Plan for Success 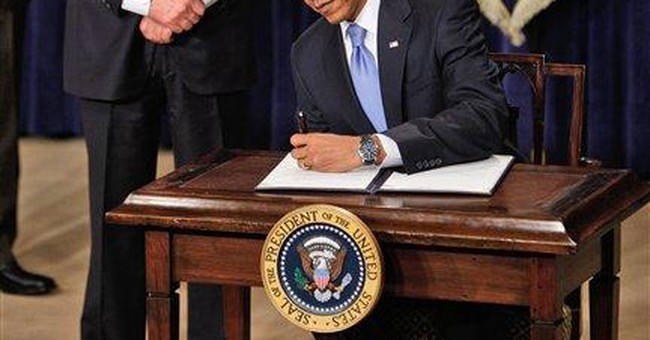 Shortly before Inauguration Day, President-elect Barack Obama refused to comment on Israel’s battle with Hamas. The United States has only one president at a time, he said.

Well, now it’s his turn. As the country’s first black commander-in-chief, Obama has already made history. He’s our president -- our only president until 2013 -- and all Americans should wish him well.

Of course, those of us on the political right are likely to disagree with his policies from time to time. That’s what democracy is all about.

We’ll never shy away from telling our leaders when they’re on the wrong path -- something George W. Bush and congressional Republicans learned when they rammed through the budget-busting Medicare prescription-drug entitlement over conservative opposition. But all Americans are eager to see our country take the right path, regardless of who gets the credit.

So as he begins his work, President Obama could benefit by looking to a predecessor who also took power during a time of economic difficulties and led his countrymen to far better days.

“The economic ills we suffer have come upon us over several decades,” Ronald Reagan declared in his first inaugural address 28 years ago. “They will not go away in days, weeks or months, but they will go away. They will go away because we as Americans have the capacity now, as we’ve had in the past, to do whatever needs to be done to preserve this last and greatest bastion of freedom.”

Reagan understood that, in the United States, the people rule. And that means we need to recognize that economic growth isn’t generated by government giving us things. Government’s job is to create a climate that makes the good things we work for possible.

Unfortunately, in the last year, the federal government has taken the wrong steps. Washington launched unprecedented spending programs, which will continue (at Obama’s request) into the new administration.

Yet if deficit spending was going to boost the economy, why didn’t the $350 billion spent in the fall of 2008 do the trick? Or the additional $350 billion Bush asked for in his last days? Our leaders are pouring on the spending, but the economy refuses to be stimulated.

Obama has pledged to “create or protect” some 3.5 million jobs, and is asking Congress to spend an additional $800 billion on a “stimulus” package to do that. That’s more than $200,000 per job. Since the average American makes about $40,000, that’s a poor return on a big investment. It would make more sense to just mail out $40,000 checks to the workers who would fill these new jobs.

Our government can’t afford to spend more. The just-departed Bush administration declined to veto a barrage of new pork-barrel and entitlement programs. Assuming the proposed Obama “stimulus” package passes, the Congressional Budget Office says the 2009 federal budget deficit (the amount our government borrows) would be almost as much as the entire amount the federal government spent in 2001.

The only quick and effective remedy is to cut tax rates. This has worked before, and will work again. A report by Heritage’s Center for Data Analysis recommends that our government take two steps.

First, extend the 2001 and 2003 tax reductions for as long as possible. (Indeed, we should make them permanent). Second, slash tax rates on individuals, small businesses and corporations through 2013 by lowering the top rate by 10 percentage points and also reducing rates for lower-income taxpayers.

The Heritage report shows that doing so would increase employment by a half million jobs this year and by a million more next year. It would create 3.6 million jobs between 2009 through 2012, at a cost of reducing federal tax receipts over five years by $670 billion. This approach would enable Obama to reach his objective while spending far less from the public purse.

If President Obama succeeds, our country probably will, as well. And, as the international credit crisis shows, American success is critical. Not just to the U.S., but to the entire world. We wish him success as he begins a difficult job.