D.W. Wilber
|
Posted: Mar 14, 2016 12:01 AM
Share   Tweet
The opinions expressed by columnists are their own and do not necessarily represent the views of Townhall.com. 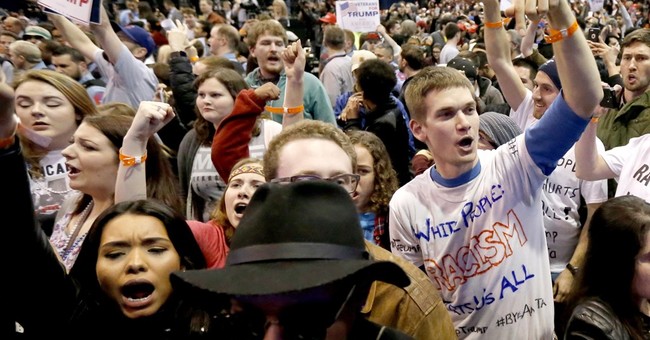 Those who were around back in 1987 will remember when President Ronald Reagan nominated Judge Robert Bork for Associate Justice of the United States Supreme Court.  The confirmation process was a highly contentious affair, with Bork’s nomination eventually blocked by the Senate Democrats.  Led by the extremist rhetoric of then Senator Ted Kennedy who unfairly accused Judge Bork of all manner of despicable things if Bork was confirmed by the United States Senate.

Following the Bork nomination the term “Bork’d” became part of the American political lexicon.  Used to describe a concerted effort on the part of one of the two major political parties in America using their majority status to deny the confirmation of Supreme Court justices and other presidential appointments by the minority party.  Regardless of the qualifications or merits of the nominee.

A modern version of Bork’ing took place Friday night in Chicago with demonstrators disrupting and eventually succeeding in getting a Donald Trump campaign rally cancelled in that Midwestern American city.  A presidential candidate’s political rally prevented out of police concerns that violence may erupt.  And simply because some people disagreed with some of the things Donald Trump had previously said.

And all likely a coordinated and funded effort on the part of leftist organizations aligned with the Democrat Party.  Just as the civil unrest, demonstrations, and rioting that occurred in Ferguson, Missouri in 2014 following the justified shooting death of black teenager Michael Brown by a white police officer, which also was a coordinated event aligned with and encouraged by the Democrat Party.

Simply because the protesters didn’t like the outcome as in Ferguson, or because Donald Trump possessed a different point of view as in Chicago, he was denied his Constitutional rights as an American citizen.  A modern day form of ‘Bork’ing’ by those politically opposed to Trump, just as was done back in 1987.

It is becoming more and more apparent that the political discourse in this country has become so contentious that a free exchange of ideas is becoming less and less possible.  At least for anyone who promotes beliefs or policies that disagree with the Democrat Party and their leftist, socialist allies in organizations like Black Lives Matter and Moveon.Org.

All one has to do is look at America’s colleges and universities where students or organizations with a more conservative philosophy are either made to feel uncomfortable, or are outright discriminated against by the administrations of these institutions.  And as happens in many cases conservative students are even physically attacked by other students.  If a student doesn’t toe the liberal, leftist/socialist party line they are unwelcome in America’s educational institutions.

Conservative guest speakers are either disinvited by cowardly college administrators, or if they are allowed to proceed with their speech they are most often shouted down during their presentations, and interrupted by students who have been encouraged to do so by leftist professors and other members of the faculty.

In some cases conservative speakers have also been physically attacked, and had pies thrown in their faces in protest of them simply asserting their Constitutionally-guaranteed freedom of speech.

If they offer an opinion that differs from the accepted socialist positions indoctrinated into America’s youths by the college ‘thought police’, they must be shouted down and prevented from offering an alternative viewpoint that might just take root in the young, impressionable minds.  One could also refer to this as a form of ‘Bork’ing’, or more appropriately “Alinsky’ing”.  After the noted radical community organizer and author of the book “Rules for Radicals” who died in 1972.

And unfortunately it’s become more and more apparent that the current crop of Democrat politicians in large part are graduates of the Saul Alinsky School of Socialist Agitation, now led by Barack Obama with former Secretary of State Hillary Clinton following closely in his footsteps.

Alinsky encouraged many of the tactics currently being employed by supporters of the Democrat Party and the drive towards socialism in America.  And while they may try to portray themselves as more “mainstream”, both Barack Obama and Hillary Clinton were and still are true disciples of Alinsky’s radical teachings.

So what happened Friday night in Chicago at the Donald Trump campaign rally was simply another learned tactic on the part of America’s radical socialist politicians and their supporters.  Both who are determined to shout down any opposition that might prevent them from reaching their goal.  Which is to force a “fundament transformation” of the United States of America onto all of us.