And All the Kings Horses….

D.W. Wilber
|
Posted: Mar 08, 2016 12:01 AM
Share   Tweet
The opinions expressed by columnists are their own and do not necessarily represent the views of Townhall.com. 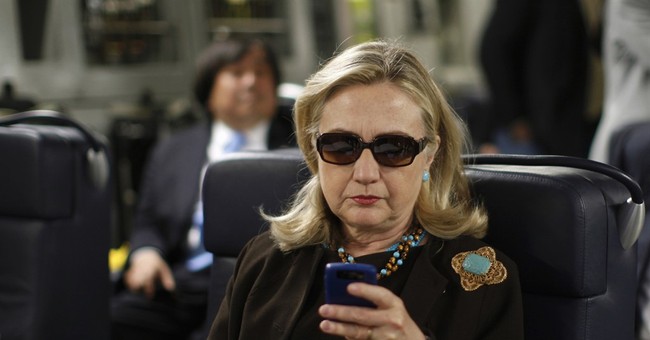 With the ‘stone-wall’ surrounding Hillary Clinton starting to crumble, as evidenced by the person who set up Clinton’s private e-mail server, Clinton’s aide Bryan Pagliano cutting an immunity deal with the Department of Justice, it appears likely that Hillary Clinton may indeed have much to answer for in the very near future.

It has already been pointed out by any number of experts that what appears to have been done with regards to Hillary’s private e-mail server could not have been an accident.  There is no way that the classified information that has so far been discovered being transmitted over Clinton’s private server could have happened ‘accidentally.’  It wasn’t simply a mistake.

It was a conscious decision on someone’s part to either copy, or to extract classified information from other communications or documents and then share that information over Hillary’s private server, in direct violation of government regulations and federal law.  There simply is no other explanation.

Which brings to mind the questions: who among Hillary Clinton’s inner circle would have made the decision to flagrantly violate government regulations and federal law?  What Clinton staffer felt that they had the authority to decide on their own that government regulations and federal law did not need to be adhered to with regards to Hillary Clinton’s method of sending and receiving electronic communications?

Was it the secretary’s Chief of Staff Cheryl Mills who gave the orders?  Or perhaps Huma Abedin elected to ignore the federal statutes governing the handling of classified information.  Could it be that Jake Sullivan just unilaterally decided that the Clinton inner circle was not bound by the same requirements that all other government employees and members of the military were required to follow?

Or did the orders come from above, from Secretary of State Hillary Clinton herself?  After all, wasn’t it her decision to install a private e-mail server in the first place?  With the government system available for her use Hillary Clinton decided that wasn’t what she wanted to do.  For some reason, other than simply a matter of convenience, Secretary Clinton elected to use her private server for all of her communications, including information deemed classified by the originating authority.

Which brings us to the crux of the matter.  Someone within the Hillary Clinton inner circle made a conscious decision to violate any number of federal laws and regulations in an attempt to avoid transparency and accountability.  Someone within the Clinton inner circle made the conscious decision to delete roughly 30,000 e-mails, again in violation of federal law.

Someone within the Clinton inner circle made the conscious decision to try to cover up and conceal any evidence of misconduct and illegality as a result of Hillary Clinton’s desire to keep her electronic communications and discussions private and unavailable to anyone but her inner circle.

With the Department of Justice offering immunity to Bryan Pagliano I’m reminded of the old nursery rhyme, ‘Humpty Dumpty.’  When Humpty fell off the wall “all the king’s horses and all the king's men couldn’t put Humpty together again.”

Hillary’s lies and deceit are starting to unravel, and her false narrative is shattering into a thousand pieces, just like Humpty Dumpty.