D.W. Wilber
|
Posted: Feb 19, 2016 12:01 AM
Share   Tweet
The opinions expressed by columnists are their own and do not necessarily represent the views of Townhall.com. 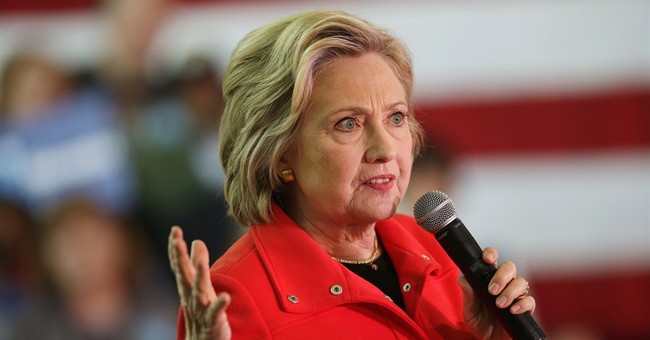 FBI investigators are definitely not barking up the wrong tree in their investigation of Hillary Clinton and her most senior advisors, for violations of numerous government regulations regarding the protection of classified information and national security secrets.  As it stands right now the FBI might well be making criminal referrals to Attorney General Loretta Lynch in the very near future.

It’ll be up to President Obama’s Department of Justice to prosecute.  But based on information leaking out from inside the FBI, the case will be buttoned up so tightly and evidence so overwhelming that the Attorney General will have little choice but to move forward with a criminal indictment against Hillary and several of her senior staff.  Or face the threat of a mass resignation from the FBI.

The evidence discussed in the news media has been overwhelming for some time now, that there have been serious violations of federal law in the Clinton camp, and even by former Secretary of State Hillary Clinton herself.  Her effort to avoid scrutiny and circumvent government disclosure and record-keeping requirements are clear violations of the law themselves.

As well as her apparent indifference to exposing highly classified information to our enemies by using her private un-encrypted and un-secured e-mail server.  A decision that calls into question how serious she would take the president’s oath of office to “protect and defend the United States of America”.  An oath she also took as Secretary of State, and one that she immediately showed she was determined to violate from the very start.

Put aside for the moment all of the other reasons why Hillary Clinton is unfit to serve as President of the United States, watching her recently entertain the entire world with her ‘canine impersonation’ alone is reason to disqualify her.  Can you imagine them howling with delight in Moscow or Tehran after watching this most recent Hillary spectacle !

How could she ever be taken seriously if she tried to talk tough to the Chinese ?  What’s she going to do, bark at them until she’s given a ‘doggie treat’ in the form of another couple of million dollars to her foundation.  More likely she would just ‘roll over’ for all of our enemies, placing the freedoms Americans cherish at risk.

Seeing Hillary barking like a dog in her pant-suit would be comical if it weren’t so sad.  The leading candidate for the Democrat Party seen on televisions around the world making a fool of herself.  I have already received e-mails from some of my friends overseas that only said, “Woof, woof”.  How embarrassing.

While Hillary’s antics before the Nevada voters might bring a smile to our adversaries faces, the reality of her antics as Secretary of State are more likely to make us cry.  The daily drip, drip, drip of information coming out about her not only placing America’s national security at risk, but also violating any number of federal regulations and laws, clearly shows that she is wholly unfit to hold the office to which she aspires.

The sheer amount of evidence so far collected against Hillary and her staff would have by now already placed any other government employee or military member in jail for committing serious criminal violations.

A good argument could be made that there certainly appears to be unequal treatment under the law in this case, with Hillary Clinton continuing her quest for the White House when she should be preparing her defense for her upcoming criminal trial.

A trial that based on just the known evidence we have right now should end up in a conviction that could easily put her in prison for many, many years.  What is unknown is how much evidence has been recovered by the FBI from the private server that she tried to wipe clean.

And clearly it would have the Democrats howling at the moon in despair.  Do they stick with Bernie, try to draft Crazy Joe Biden, or dust off one of the other has-beens of the party.  Find another old white guy promising lots of free stuff to minorities, with no intention nor the ability to ever follow through.  No difference really from the two currently running.

And as for former President Bill Clinton, one can assume he would also have a comment to make.  I can see it now, with a wry little smile breaking across his face he will quote the Reverend Dr. Martin Luther King saying, “Free at last, free at last.  Thank God almighty I am free at last” as Hillary does a ‘perp walk’ on the evening news.