D.W. Wilber
|
Posted: Jan 08, 2016 12:01 AM
Share   Tweet
The opinions expressed by columnists are their own and do not necessarily represent the views of Townhall.com. 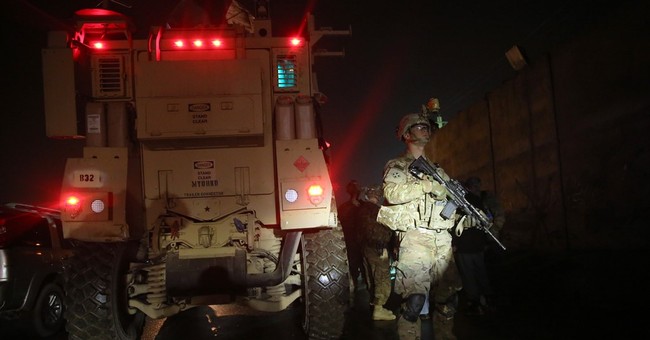 Watching the Obama Administration this week dance all around trying to avoid using the word “combat” after American troops came under fire in Afghanistan was almost comical. And were it not for the gravity of the situation and the fact that American troops were fighting and dying in ‘combat’ it would have been.

And tragically one soldier was indeed killed in action, and at least two more wounded as a result of the engagement with Taliban terrorists in the Helmand Province in Afghanistan.

But it wasn’t an act of workplace violence that was taking place, not an active shooter situation, or a terrible example of gun violence as Barack Obama would prefer to have us believe. American Special Operators were instead heavily involved in combat operations. A fact of life for our troops in Afghanistan, whether the politicians in Washington want to acknowledge it or not.

There’s a sometimes-inconvenient fact about “training and advising missions” for our military. Sometimes we have to accompany the people we’re training and advising when they go out on a patrol. It’s our job to make sure they do everything they’ve been taught correctly, that they accomplish their mission, and that they all come back alive.

Unfortunately, sometimes the enemy doesn’t follow the same training schedule as we do; sometimes the enemy attacks. And they’re pretty indiscriminant in who they shoot at. The fact that American soldiers are present but not supposed to be involved in “combat operations” doesn’t mean that our troops can just make a ‘T’ with their hands and ask for a ‘time out’ so they can leave the field of battle.

It only works that way in the briefing rooms in Washington, D.C., never on the battlefields our soldiers sometimes find themselves occupying when large amounts of lead are being sent in their direction by the enemy.

Sadly for our military men and women serving overseas in harm’s way, it doesn’t really appear that their commander in chief is fully committed to the mission. He never has been. He came along very begrudgingly, kicking and screaming because he didn’t like the wars that he inherited.

And actually winning them wasn’t of interest to him, only getting out so he could keep his campaign promises is what mattered. That’s why he has saddled our troops with so many restrictions that it hampers their combat effectiveness.

Ask anyone who has served in combat in Afghanistan or Iraq about the rules of engagement they are obligated to follow. They’ll all tell you that they are unworkable and place American and other innocent lives at risk. While no one wants to see another My Lai massacre as happened during the Vietnam War, we also cannot handcuff our soldiers with such strict rules of engagement that their own lives are imperiled.

According to ‘candidate’ Obama, Afghanistan was the “good war”, yet he has repeatedly failed to follow the advice of his military commanders on the ground and in the Pentagon. When they asked for more troops, he gave them half as many as they asked for. When his ego took a beating over some uncomplimentary things that were said about him, he removed the commander instead of brushing off the remarks of some junior officers and putting his full support behind his general.

The rules of engagement put into place have forced our troops when they come under attack to hesitate and question whether or not they’re going to end up in jail, instead of reacting quickly to the enemy and unleashing hell on him downrange.

One doesn’t win wars by stopping in the middle of a battle and checking the rule book to make sure you’re not violating anything, lest the ‘referees’ back in Washington throw a yellow flag and penalize you. Not in yards as on a football field, but in years as in Ft. Leavenworth.

While our Special Operators in Helmand Province fought with courage and real “honor and distinction”, unlike National Security Advisor Susan Rice’s favorite soldier, I can guarantee you that at no time did they feel “trapped”, as headlines in many news outlets described. I’m certain that they felt that their tactical situation was actually very good. They were able to kill the enemy in every direction!

The thing that most people who have never served in the military don’t and never will understand, is that just like the heroes from Benghazi did, our troops always run towards the sound of gunfire. They understand that being an American is about being a part of something that’s bigger than oneself.