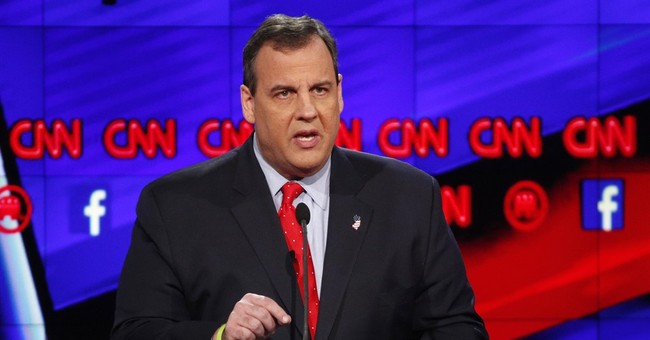 During the last Republican debate I noticed an interesting parallel between New Jersey Governor Chris Christie and the Republican icon, former President Ronald Reagan. Now before you fall over backwards in your chair, just take a second to think about it and let me explain.

For much of the time the debate focused on Florida Senator Marco Rubio and Senator Ted Cruz of Texas who engaged in a number of back-and-forth’s over the minutiae of various pieces of legislation, to the point that Governor Christie made the memorable comment about the voter’s “eyes glazing over”.

But during a break in the Rubio – Cruz squabbles an exchange took place between Governor Christie and Kentucky Senator Rand Paul when I caught just a glimmer of something in a candidate for president that Americans haven’t seen in decades.

Call me crazy but when Senator Paul implied that Governor Christie would be the “World War III candidate”, after Christie had talked tough about enforcing a no fly zone in Syria, to the point of shooting down a Russian aircraft if it violated the space, I saw a look and heard a voice of determination, a glimpse of something that reminded me just a little bit of the Gipper himself.

I clearly remember when he was campaigning for president, and for all throughout his presidency really, Ronald Reagan was being called “crazy”, a “war monger”, and “dangerous” by most Democrats, the liberal news media, and the European elites. A “cowboy”, he was accused of even threatening a nuclear war with Russia.

The interesting thing about candidate and later President Ronald Reagan was that he scared the living daylights out of the Soviet leadership in Moscow. It was that tough talk that was also heard loud and clear in Tehran and brought home the fifty-two Americans being held hostage by Iran the day Reagan was sworn in.

Tough talk that eventually brought the Soviet Union’s Premiere Gorbachev to the negotiating table, and it eventually led to the collapse of Communist Russia and gave freedom to millions of Eastern Europeans who had lived under the iron fist of Soviet domination for decades. The Russians, and the Iranians for that matter were simply convinced that Reagan was crazy enough to do it!

All the while President Reagan just sat back and smiled to himself and thought about the next subtle, and none-too-subtle message he was going to send to the Soviets to ‘get their attention’. Reagan knew that tough talk backed up by a strong military, and a willingness to use them in defense of freedom in the world would tame the Russian Bear.

And it worked, right up until Hillary hit a ‘re-set button’ and Vladimir Putin got his first glimpse of Barack Obama. And Putin’s assessment of Obama was spot on. Retired Army Lieutenant Colonel and frequent Fox News military analyst Ralph Peters summed it up perfectly just recently.

And while no one will mistake Christie from New Jersey for the Western ruggedness that Ronald Reagan exhibited, the language I heard during the debate was the same. Language which was unambiguous and which I certainly didn’t doubt, nor do I believe anyone else watching including the Russians, doubted that Governor Christie meant exactly what he said. A message that has been lacking in our foreign policy for seven years now.

I don’t know if it was his intention to sound ‘Reaganesque’, but Governor Christie’s response to Senator Rand Paul’s comment got Vladimir Putin’s attention way over in the Kremlin, I guarantee it. And I sincerely doubt that Putin will be much inclined to dismiss Chris Christie the way that he does Barack Obama.

The New Jersey governor has a long way to go to win the Republican Party’s nomination for president in 2016. And he has even further to go before he reaches the stature of a Ronald Reagan. But tough talk from someone who will back it up is what Americans are looking for. Americans want someone to undo the damage to the fiber of America that the Democrats and their standard bearer Barack Obama have caused to this country.

Starting with defeating the scourge of Islamic terrorism threatening the entire world, reigning in the ambitions of a once again belligerent Russia threatening its neighbors, the Communist Chinese expanding in the South China Sea, and here at home the racial unrest created, choreographed, and nurtured by the Obama Administration.

If Governor Christie can continue to tell the American people like it is in the plain language they understand and want, all the smooth-talking master-debaters in the world will not be able to hold a candle to the message the New Jersey Governor has to offer.