Keep James Taylor at Home and Send in the Tanks 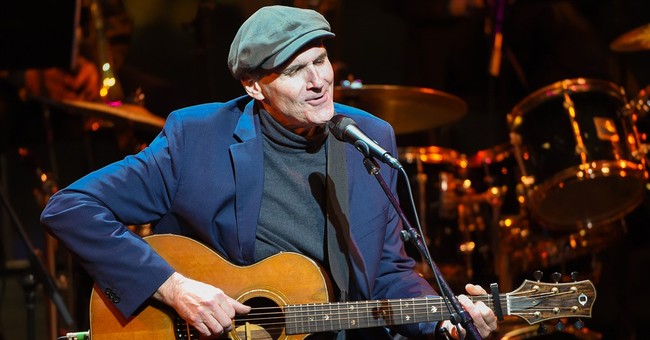 With his initial comments on the horrifying multiple Islamic terrorist attacks in Paris, Barack Obama’s response to these types of attacks continues to be pitiful. The message he conveys is hardly one of strength and commitment. More a look of hand-wringing and a deer-in-the-headlights.

Sorry, but Barack Obama just doesn’t ‘look’ like he exudes strength and commitment. When he steps before a microphone he exhibits a look of cluelessness and weakness that our enemies clearly recognize. They just don’t take him seriously.

With a somber look on his face he mumbles some nonsense about ‘solidarity with the victims,’ then he admonishes us all “not to jump to conclusions” about who is responsible, even while the shouts of “Allahu akbar” are still echoing off in the distance.

Then he tightens his jaw muscles and with a determined look on his face tells us that “all our resources will be brought to bear, and the perpetrators will be brought to justice”. I watch his comments and then immediately dismiss them as nothing but banalities expressed solely for political purposes. He might chase some around with a drone, but he’ll never follow through with real commitment to defeat and destroy Radical Islam.

Just as our friends and enemies dismiss him. Yes, not just our enemies but even our friends dismiss this president. No one believes that he is committed to protecting and defending the United States of America, or in defeating the world’s common enemy, Radical Islam.

As he did following the tragic Charlie Hebdo shooting also in Paris, Barack Obama’s response was underwhelming, sending James Taylor over to serenade the French with his rendition of “You’ve Got a Friend.” While Secretary of State John Kerry stood awkwardly nearby with a look of approval on his face. I suspect the French would have appreciated much more a B-52 bombing run on the declared capital of ISIS in Syria, rather than some has-been singer from America’s own radical 60’s past.

Were the French not still deeply mourning the Islamic terrorist attack against them, they would have been laughing at Barack Obama behind his back. Though he wouldn’t have noticed since he probably would have been gazing into a mirror and congratulating himself over his ‘deft’ handling of the situation.

Barack Hussein Obama just doesn’t get it. For whatever the reason is he cannot bring himself to publicly acknowledge that the entire world, not just the United States, is at war with Radical Islam. His seemingly pathological insistence on following a strategy of ‘If we be nice to them, they’ll quit killing us’ is baffling when they prove over and over again that they enjoy killing us.

An educated man, one would think that Barack Obama isn’t blind to who is behind what is happening in the world. But his resistance to clearly identify Radical Islam as a threat to the entire world when it is obvious to even a casual observer causes one to wonder.

As his predecessor George W. Bush said while standing on a pile of smoldering rubble in New York following the September 11, 2001 attacks, the United States is engaged in a war unlike any other we have ever been engaged in. Barack Obama may want to deny or ignore Bush’s declaration, but Bush was absolutely correct.

Our enemy Radical Islam is a determined enemy that has been emboldened by Barack Obama’s disengagement from the War on Terror. While under the Bush Administration Radical Islam was for the most part kept off balance and on their heels. With Obama’s surrender, Radical Islam has had the opportunity to regroup and go on the offensive.

If we’re not on the offensive, then we are clearly in a defensive posture. One doesn’t win a war from a defensive posture. General George S. Patton said it very clearly, and I paraphrase, “We’re going to hold onto him by the nose, and we’re going to kick him in the ‘rear end.’ We’re going to kick the ‘heck’ out of him all the time, and we’re going to go through him like ‘stuff’ through a goose.” Wouldn’t it be nice if we had a commander in chief who was as clear in his determination to defeat our enemies as George Patton was?

Last night while watching the news reports and then hugging closely my loved ones, I walked over to the calendar hanging on the wall. I tore off another page counting down the days until the date Barack Hussein Obama is no longer occupying the residence at 1600 Pennsylvania Avenue. For some reason I just don’t sleep well at night knowing his hand is on the wheel of the ship of state.