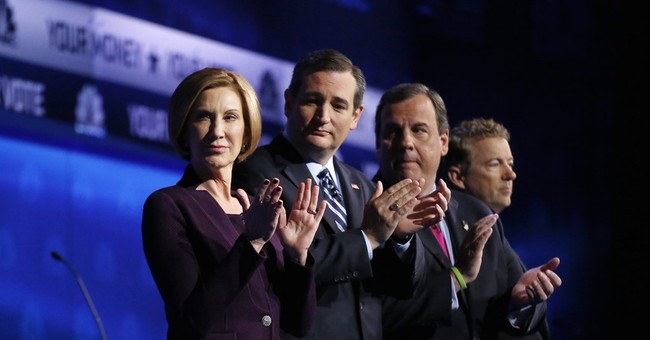 The Democrat debate focused on attacking Republicans and continuing the division in this country created originally by the Clintons way back during Bill Clinton’s two campaigns for the presidency, and which was been built upon and fine tuned to a sharp edge by Barack Obama. And by attacking the Second Amendment of the Constitution and trying to outdo each other in offering free stuff to voters.

The big loser in this Republican debate was the so-called “mainstream media” which took it on the chin during a number of exchanges with the candidates. The only thing that the host CNBC could have done differently was to make the panel of questioners wear their ‘Hillary’ campaign buttons they surely left on their bedroom night-table back home.

Their political bias was obvious in the questioning and how they moderated the debate. And the studio audience and I’m sure many watching at home expressed their displeasure on a number of occasions. I suspect a few shoes hit television screens during the course of the debate.

For the most part the Republicans offered realistic and reasoned responses to the questions they were asked. And to their credit the candidates apparently have had enough of the media political bias and some have finally begun to fight back. Oh if only Republicans had been doing so for the last couple of decades, instead of letting Democrats control the media and the narrative for so long.

Senator Ted Cruz of Texas started the evening’s fireworks off by firing a salvo directed at the Democrat-controlled media for their obvious political bias and their blatant attempts to create division among the candidates on stage.

Rightly pointing out that it was nothing more than a cheap attempt by the moderators to make the candidates look bad by getting them to start fighting each other. Contrary to the media love-fest erroneously called the ‘Democrat Debate’ that took place recently.

More of a pep rally for Hillary Clinton really, with only former Senator Jim Webb showing any independence, or a realistic understanding of the economic and foreign policy challenges facing America. At least he understands that you can’t give everybody everything without there being some serious economic costs involved that simply raising taxes on “the rich” won’t pay for.

Fortunately, for the most part the Republican candidates kept to the issues and ignored CNBC’s attempts to create confusion, in-fighting, and muddying up their messages. And as a result voters were able to get a clearer picture of where the candidates stood on many of the important economic issues facing the country.

A stark contrast to the Democrat’s economic plans they laid out which consists of nothing more than ‘free stuff for all’. Apparently Democrats believe that free ‘Obama phones’ is all that most voters really care about.

The CNBC inquisitors seemed to revel in asking ‘gotcha’ questions, yet acted surprised and indignant when those questions backfired on them. They seemed to be completely caught off-guard. How dare Republicans to actually fight back and not just squirm and roll over and take it !

Everyone has their own political philosophy, but as debate moderators and questioners their liberal Democrat credentials should have been left at the entrance door to the debate hall, not brought in and put on display for millions of television viewers.

The election is still a long way off and much can happen between now and November 2016 to sway voters one way or another. But Republicans showed tonight that there is a clear distinction between the Republican Party and the Democrat Party.

The Republicans showed that they are a new and vibrant, inclusive party of ideas and real solutions, while the Democrats continue to be the party of division, failed programs, and old worn out white candidates.