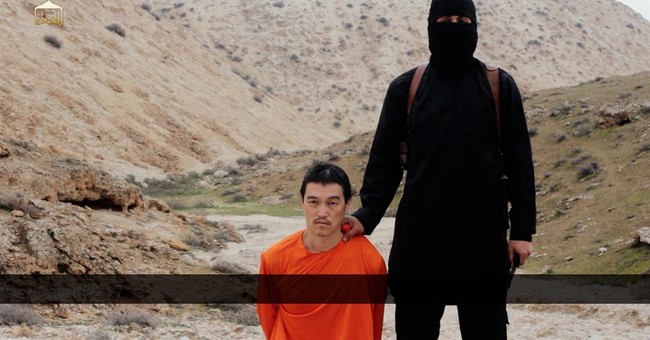 Following the horrific murder of the Jordanian pilot burned alive in a cage at the hands of ISIS terrorists who are Muslims that clearly practice extremist Islam, the most that Barack Obama could muster when questioned about it was to call it “a bankrupt ideology”. The president went on to say, “We THINK we’re going to double our efforts”. “We THINK” ?

What level of depravity does it need to reach before the Obama Administration can come to the conclusion that we not only need to “double” our efforts, but to commit fully whatever it takes to completely destroy ISIS and any others that practice this extremist Islamic barbarism. It’s going to be entertaining to watch how the White House press secretary spins this one.

Barack Obama and his administration continue to refuse to recognize that the ISIS terrorists are operating under the umbrella of Islam, extremist Islam to be sure but still claiming to be guided by the Muslim faith. Apparently the Obama Administration seems to think that by tip-toeing around the reality of Islamic extremism and calling it something else they are scoring points with so-called ‘moderate’ Muslims.

ISIS beheads, tortures, rapes, and burns people alive and they’re called “bankrupt”. Yet the Islamic Republic of Iran through their Hezbollah and Hamas proxies rain missiles down on innocent Israelis and non-military civilian targets throughout the Jewish state, and Barack Obama was recently quoted saying that he could “envision reopening diplomatic relations with Iran”.

My question is who in the Obama Administration does the ‘scoring’ of how moderate that Muslims truly are ? What do they use as their criterion for determining between moderation and what’s merely “bankrupt” ?

If the targets are Israeli citizens does that mean that the one behind killing those Israeli’s is a “moderate” ? Do the victims have to be butchered alive on TV in order to qualify as a “bankrupt ideology” ? And one certainly not reflective of Islam ?

Until the Obama Administration recognizes that the brutality of ISIS is indeed being done in the name of Islam and that it is an ideology that if not practiced by a large number of Muslims, then at the very least far too many Muslims are sympathetic to the ISIS cause and their methods.

Had the Jordanian pilot who was burned alive been an Israeli pilot instead would most Palestinians find what was done repulsive ? Or would one see dancing and cheering in the streets of Gaza as was witnessed on September 11, 2001 when Muslims flew jet airliners into the World Trade Center in New York, burning alive many innocent Americans ?