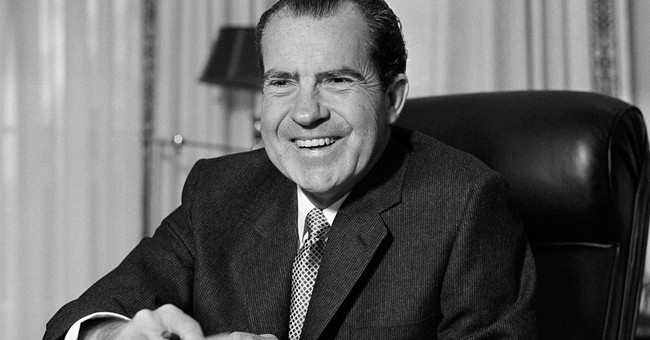 During his presidency and throughout his political career former President Richard Nixon was derisively tagged by the liberal media as “Tricky Dick” for his supposed record of deceit and dishonesty. It was a nickname deserved or not that stuck with Nixon after his resignation from the presidency and into his forced retirement.

Fast forward to the year 2015 and it would seem that the appellation “Tricky” would more appropriately fit the current resident of the White House, Barack Obama. In fact Obama’s record of deceit and dishonesty both precedes his taking up residence at 1600 Pennsylvania Avenue, and has continued unabated for six years.

Barack Obama’s entire career appears to have been one of deceit, from his denial of his close association with the anti-American ‘Reverend’ Jeremiah Wright to his friendship with domestic terrorist Bill Ayers. Barack Obama was dishonest about these relationships during his first campaign for the presidency and he has continued his many canards up to the present.

During his 2008 campaign Barack Obama worked diligently at passing himself off as a moderate-to-just left of center politician, but certainly not the extreme leftist politician that he revealed himself to be once he took office. During his brief conversation with Joe the Plumber he inadvertently let slip his true intentions to “spread the wealth” if elected. But his campaign along with a pliant news media quickly went to work to downplay this exchange.

Once taking office Obama was quick to display his true ideology and agenda. Anti-rich, anti-police, anti-military, anti-American. After all, he told us he wanted to “fundamentally transform” the United States didn’t he ?

In the incident involving Harvard Professor Henry Louis Gates, without having any firsthand knowledge of what happened he quickly claimed that “the police acted stupidly”. His continuous attacks on those who are successful remains unrestrained. And he has forced a social agenda onto the military allowing openly gay individuals to serve, and to open front line combat units to women.

Rushing to claim ‘symbolic parenthood’ to Trayvon Martin, the president also sent White House representatives to attend the funeral of Michael Brown, an eighteen-year-old thug killed after committing a robbery and then attacking a police officer, and inviting the fraud Al Sharpton to be a trusted White House advisor. Obama’s racial politics are obvious.

Not to offend Muslims the terrorist attack at Ft. Hood was and has ever since been referred to as “workplace violence” even though the Muslim shooter was yelling “Allahu Akbar” while blasting away at unarmed soldiers.

From free ‘ObamaPhones’ and ‘Cash for Clunkers’, to ‘ObamaCare’ and now ‘Free Community College for everyone’, Barack Obama has engaged in a spending binge on an unparalleled level and has waged an ongoing war against “the rich” at every opportunity.

Implying that the poor and middle class aren’t afforded a “fair shot” at success because of “the rich”, and calling for tax increases on “the rich” every chance he gets. The bottom line is Barack Obama has never seen a tax increase he didn’t like, nor a wealthy person that he did.

While his liberalism was obvious for all to see in 2008, no one could foresee just how extreme his liberalism would become apparent once he took office. This he was determined to conceal from the American people.

His State of the Union Address Tuesday night continued with attacks against “The Rich”, once again engaging in class warfare and trying to gin up support for Democrats in the 2016 elections.

Barack Obama has indeed concealed many tricks up his sleeve since taking office, and the next two years promise to be a continuation of the same. Tricky indeed.