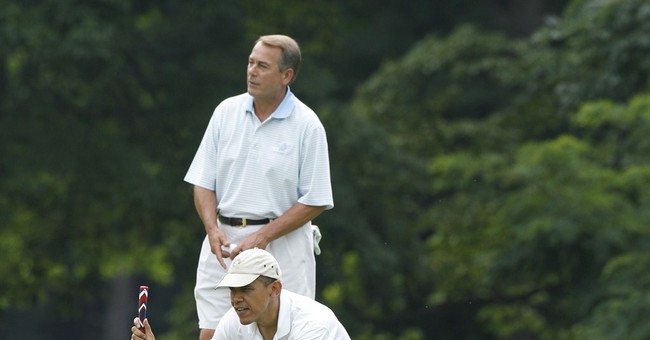 Never one to be much interested in foreign affairs, the American President Barack Obama this weekend sent a clear message to the rest of the civilized world. The none-to-subtle message is that over the next two years should any international crisis arise, they will all be on their own. Under this administration America has opted out of our historical leadership position in the world.

In fairness Barack Obama made it no secret that from the very beginning his administration was going to be focused on domestic issues. Determined to achieve the “fundamental transformation” of the United States that he envisioned.

Shortly after taking office the president embarked on his ‘apology tour’, believing that by disparaging and humbling his own country before the world, that America’s enemies would see that we no longer pose any threat to them. And therefor they need not be concerned about any future American interference in their affairs.

His hope was that with the apology tour out of the way, the one major foreign policy endeavor of his administration would be accomplished. He could then turn his attention to remaking the United States into the leftist-socialist utopia he intended.

But why would the president choose not to show up at the Paris gathering of world leaders attended by most of America’s allies ? All coming together in a show of support for France, one of America’s longest and most enduring friends.

Is it because Barack Obama senses the disdain that other world leaders have for him ? Was that why a couple of years ago he was so interested in listening in on German Chancellor Angela Merkel’s private telephone conversations, to see if she had anything disparaging to say about him behind his back ?

Vladimir Putin clearly can barely conceal his disdain for the American president he has bested on a number of occasions over the past six years. The Russian news media has been brutal in their treatment of Barack Obama, publishing blatantly racist editorial cartoons. Other cartoons and writings have even called into question Obama’s very ‘manhood’. Considering that the Russian news media does nothing without Vladimir Putin’s approval, it’s obvious that the Russian leader has a complete lack of respect for his American counterpart. And Barack Obama knows it and is obviously uncomfortable in Putin’s presence.

Israel, the United States’ closest ally in the Middle East has come to understand that Barack Obama is no friend of the Jewish state. Israeli Prime Minister Benjamin Netanyahu has felt ‘on his own’ for some time now, confronted with an America that seems more interested in courting a relationship with Israel’s arch enemy Iran, than in maintaining the special relationship Israel has held with the United States through every previous American administration.

Ukraine too has stood by waiting for the United States to become more engaged in their current crisis with Russia. To provide the weapons and other support that could help Ukraine keep the Russian Bear at bay and Ukraine aligned with the West. Only to be given the proverbial back of the hand by the Obama Administration. Ukraine is an unfortunate victim of Vladimir Putin’s intimidation of Barack Obama, as well as Obama’s disinterest in foreign policy and European security.

Across a large swath of Iraq and Syria ISIS terrorists butcher and behead Americans and others while Barack Obama dithers about implementing an effective strategy to defeat this evil scourge.

An evil that might not even exist had Obama not been so impatient to remove all American forces from Iraq without leaving behind enough to help maintain the peace. American troops that could have helped Iraq continue their own fundamental transformation into an important American ally on the troubled Arabian Peninsula.

The president seems more interested and determined to achieve a campaign promise to close GITMO, even if it means releasing committed extremists who will return to the battlefield and eventually kill or publicly behead more Americans.

In our own hemisphere the president has initiated a curious diplomatic opening with Cuba, and doing so without obtaining any real concessions from the Cuban dictatorship. In effect giving legitimacy to and accepting a Cuban regime that has brutalized the Cuban people for sixty years.

While world leaders gathered in Paris in a display of solidarity against terrorism, Barack Obama noticeably remained in the U.S., more concerned with giving speeches about providing a free community college education for all Americans. Another example of where his priorities lie.

For two more years while Barack Obama works on his golf swing, the American people as well as our allies and friends overseas will basically be ‘treading water’. All of us impatiently waiting for a new American president. One who will return the United States to its’ rightful place of leadership in the Free World.