Coming Soon to a Theater Near You,…..NOT! 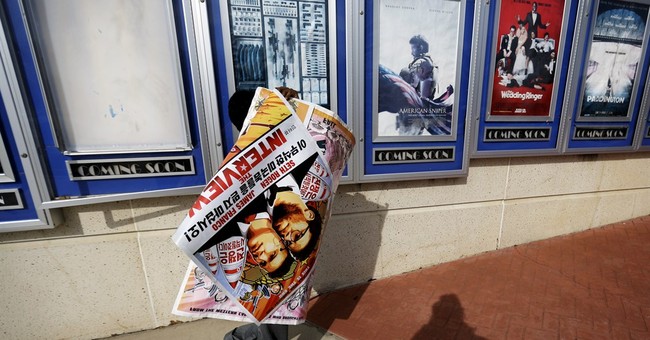 Licking their chops after the successful cyber-attack against SONY, North Korea’s hermit regime is celebrating in Pyongyang, and most likely anticipating their next move against the United States.

The fact that they shut down the release of the Hollywood production ‘The Interview’ by issuing threats against theaters showing the film, and embarrassing SONY executives by gaining access to and releasing their personal e-mails, should be a concern for all Americans.

By allowing this attack to go unanswered the Obama Administration has opened up the United States to additional attacks from our enemies abroad. What’s the next target, our very vulnerable power grid ? I suspect our adversaries in Iran, China and Russia are already looking at this successful effort by North Korea as a model, and making their own plans for the future.

One thing I find ironic is how Hollywood stands firm as the Rock of Gibraltar when the target of their ridicule in movies is conservatives, the military, and traditional Christians. No matter how insulting and disparaging the films might be to those groups, Hollywood claims some supposed moral high ground of ‘free artistic expression’, and plows full speed ahead with a film’s release. Caring little about the concerns of groups or individuals they disagree with politically.

Unfortunately based on the Obama Administration’s record they would most likely fully support Hollywood’s attacks on conservatives, Christians, and the military.

Considering the vulnerability of the American power grid, we would all be well served to think about the potential of a future without electricity, and perhaps make a few preparations just in case one of our enemies decide to follow North Korea’s lead. The impact on this country would be devastating. Unfortunately little more than lip service is being paid to the problem by politicians, and even that is muted. Very little is actually being done to strengthen our critical infrastructure and protect it against attack.

Most assuredly President Obama’s response would again likely be even more limited, considering the fact that the president’s tele-prompters need electricity to operate.

Those in the entertainment industry would do well to understand that some of those groups they like to disparage such as the military, have fought and died over the years to protect Hollywood’s right to make the very films that have insulted and attacked the military repeatedly, all in the name of ‘artistic expression’.