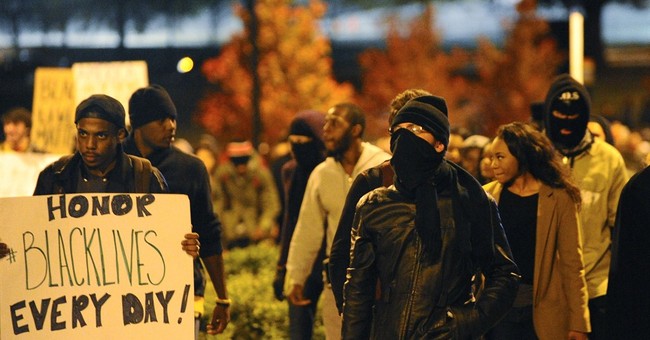 As Americans sat down to enjoy their Thanksgiving Day repast and give thanks for all the blessings bestowed upon them by this great land in which we live, many in Ferguson made the trek to a small memorial decked out in flowers and teddy bears. A memorial to St. Michael the Gentle Giant, located not in a large cathedral but on a minor side street of this St. Louis suburban community.

Around the country people have been expressing their feelings of devotion for St. Michael, who it almost seems is quickly overshadowing the legacy of Dr. Martin Luther King as a symbol of the struggle for racial equality in America.

Based on his portrayal in much of the media and by his family of supporters around the nation, St. Michael appears to have become the new ‘Patron Saint for the Racially Aggrieved’.

A poor, innocent youth elevated to sainthood by an assassins bullet aimed and fired by a racist police officer, who served as the symbolic arm of a racist society that places no value on the lives of young men of color.

St. Michael, though his life cut tragically short has still been able to work miraculous deeds. Even in death St. Michael’s inspiration has helped bestow a bounteous blessing upon his followers in Ferguson. Blessings liberated from the racist and greedy merchants of that community, laid to waste by St. Michael’s followers.

As Moses raised his arms and opened up the Red Sea, St. Michael’s followers in Ferguson raised a torch and laid waste to a community. All in the name of St. Michael, the “Gentle Giant”.

Considering the coverage in many news outlets of the tragedy and myth of Michael Brown’s life and death, one would think that he’s been given a ‘Papal waiver’ and has skipped right past all the traditional steps righteous people normally have to clear prior to beatification, and has been elevated immediately to the level of Sainthood.

The reality is that Michael Brown was no saint, he was just a thug. A teenager with an attitude who grew up mean and angry on the streets of Ferguson. If Michael Brown saw something he wanted he just took it. And when confronted by someone over his transgression he lashed out violently.

No contrition, no remorse. Just anger and meanness. Michael Brown was far from a “gentle giant”. And much farther from the saint he’s being portrayed as by the media and the well-known professional race hustlers. Based on how he lived his life I’m more inclined to believe that young Michael will spend a fair amount of time in Purgatory before he’s ever considered for entry through the Pearly Gates, much less bestowed ‘sainthood’.

Portraying Michael Brown as anything more than the thug he was, and trying to equate his life and death as some significant part of the ‘black struggle’ for equality, is an insult and a disservice to the countless REAL African American heroes of the past who fought and died in the name of civil rights. Michael Brown has no business sharing a pedestal with someone of Dr. Martin Luther King’s stature. Michael Brown doesn’t even deserve to stand in Dr. King’s shadow.

Those who demonstrate and riot in Ferguson and all across America in the name of Michael Brown bring discredit to the legitimate concerns of African Americans. A group who have suffered more in the past six years during the administration of the first black president than they did in the preceding decades.

While we understand and take note of the grief of his parents and relatives let’s not change the story of his life from the reality it was, into some fairy tale it was not. No “gentle giant” twice the size of another shoves that person around and threatens and intimidates them while stealing their property.

That just makes him a thug and a thief, and certainly not a saint.