Don't Let Huckabee and the Media Silence the Conservative Voice 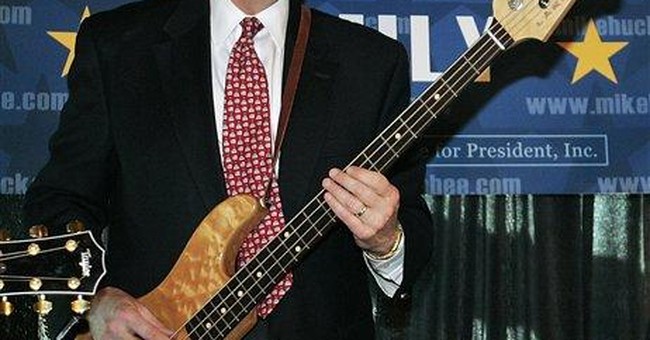 Are you a conservative? Have you been paying attention during this primary season? Are you aware that after this Tuesday, your voice, if not totally silenced, may be willingly, and even gleefully, disregarded in a calculated strategy to appeal to liberal, Democrat, independent, and Hispanic voters?

Do you care? If so, you have until Tuesday evening to make your principled and patriotic voice heard. For after Tuesday, if Mike Huckabee succeeds in his self-serving quest to deny Mitt Romney the nomination, then it will be conservatives who will be placed at the back of the line…for years to come.

Rich Lowry of The National Review, said Huckabee has a “Man-crush” on John McCain. Not true. Huckabee has a crush on power and will be subservient to anyone he thinks will elevate him to the next level. As of today, that someone is the New York Times, Boston Globe, Washington Post endorsed, John McCain. To reach the vice presidency, Huckabee has decided – at the risk of driving a stake into the heart of the conservative movement – to siphon as many votes as possible away from Romney so his master, McCain, will have clear sailing to the nomination.

Poor Huckabee. In his rush to compromise himself, he has not stopped to do some basic math. Basic math that dictates that as soon as he is no longer useful to the McCain campaign, he will be cast off the “Straight Talk” express at the nearest ditch. Blinded by his desire for power, Huckabee has not realized that there is no rational, logical, or political reason, for McCain to pick him as his running mate. Once the nomination is secure, Huckabee will revert back to the kind of evangelical McCain denounced so loudly back in 2000.

The betting in the McCain-Huckabee-New York Times camp is that your conservative opinion has become irrelevant. That your opinion and your vote has been displaced by a coalition of liberal, Democrat, independent, and Hispanic votes that have been directed to the “Straight Talk” express by the far-left media.

Bill Clinton has recently talked about fairy tales. A popular fairy tale being floated by the mainstream media is that John McCain would be the toughest Republican for the Democrat nominee to defeat in November. While entertaining in some quarters, it is not true. When asked, every single Democrat powerbroker I have spoken with in Washington, has told me that they fear Romney in a general election. They feel his “reasoned” conservatism would strike a chord with a majority of voters concerned with economic and national security, as well as illegal immigration.

That said, with no hope for the nomination, and no hope to be picked as a running mate, Mike Huckabee continues his Machiavellian campaign to derail Romney. Why?

In concert with that campaign, pro-abortion, pro-amnesty, pro-tax hike, “Republicans” and editorial pages, rush to endorse John McCain. Why?

You have until Tuesday evening to prove them wrong. If not, we will all pay a very steep price.