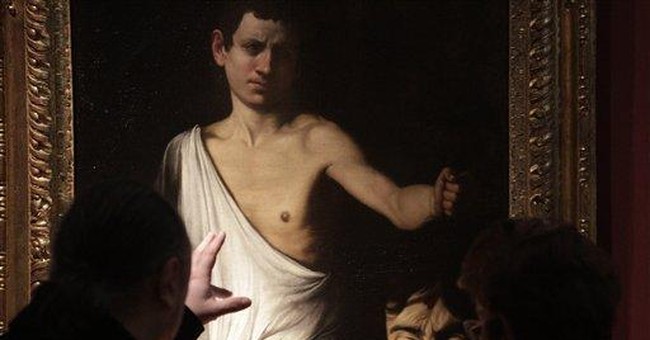 How many of you are familiar with David and Goliath?

Is that the place where you can get food and beer and play hundreds of games under one roof? Man that place is a hoot. A real hoot!

No, David and Goliath is the epic biblical tale in 1st Samuel 17 about a teen who had the moxie to take on a giant with rocks and a slingshot while all his bros stood by and shook like scared punks.

By the way, not only did David’s siblings dwell in immobilizing dread, but like most terror-addled slaves they also discouraged David from taking Goliath on. Don’t you just love advice from the unimaginative-risk-adverse-shriveled-testicle-cold-water-bucket-brigade? No? Me neither.

Yep, this well-known, scriptural narrative spotlights the fact that an ill-equipped person with ridiculous odds piled against him can achieve gigantic accomplishments if they dare to believe and act contrary to what the “experts” advise.

In this little screed I hope to help you defy the way you think about all the sucky stuff that keeps most people curled up in the fetal position wetting their big “Woe-Is-Me” diaper instead of cowboying up and playing the man.

So… without further ado let’s check out David’s dilemmas… dilemmas, little kiddies, that David wouldn’t allow to hamstring him.

1. David was not liked by his family. According to this book called “The Bible” David had two half-sisters (1 Chron. 2:13-16) and the father wasn’t old Jesse but some cat named Nahash (2 Sam.17:25, 2 Sam.10:2) who was a king to the Ammonites. Which could mean the boy’s old lady might’ve been the second wife of Jesse.

If the above deduction is spot on, it would explain why David’s bros considered themselves better than David and also explain why he got overlooked when Samuel sought to anoint a king from Jesse’s brood (1 Sam.16:11).

To leap further down the tawdry funnel, it also could mean that Jesse was bumping uglies with some other lady who was married to another man and she got preggers. Good Lawd! This is Honey-Boo-Boo-Reality Show stuff.

Suffice it to say that, whatever the scenario in which David was conceived, it was not heavenly like the Christmas Story. It’s more akin to something The Kardashians would be accustom to, which might explain verses like…

And … Ps.69:8: “I am become a stranger unto my brethren, and an alien unto my mother’s children.— 19 Thou hast known my reproach, and my shame, and my dishonour: mine adversaries are all before thee.”

Indeed, it seems as if David was a product of adultery. Which is no big whoop nowadays in our decadent days, but back in the OT that was a deal breaker regarding respect and covenant blessings. According to his culture, in his day, David was a skank… a second-class citizen … a mere bastard rube.

2. David had a horrible job. 1 Sam.16:11 states that David was a shepherd of his dad’s sheep. That’s not the dream job, folks. I doubt that David Facebooked his vocation or took pics with his moronic sheep that he had the misfortune to oversee.

Sheep are dull animals that do nothing but eat, crap, sleep, have sex and grow fur. That’s it. Nothing exciting about that line of work except of course when predators come in to try to snack on your old man’s livestock.

Most of the days are simply spent just sitting there watching them exist. It’s much like viewing paint dry or grass grow or reading the instruction manual of a hinge over and over and over. Nothing sexy or inspiring about that work. I seriously doubt even Mike Rowe could make it look robust.

3. David was a teenager. Just like with most teens today, people back in the Old Testament didn’t look for jaw- dropping greatness to come tumbling from a teen.

4. David had no “military training” to tackle the monster he faced and the only weapons he knew how to wield were “ridiculous” according to military wizards of his day.

5. David had zero support from his family or peers. No one believed in him. No one was singing encouraging Katy Perry songs to him or quoting to him heretical, anthropocentric Joel Osteen quotes on how to “Make Every Day A Friday!” No one thought he could/would be king or that he could topple Gath’s ghastly, gigantic ghoul who had cowed all of Israel. No one. As in zippo.

And yet… with all this smack stacked against him David succeeded against all odds and all naysayers.

So … how would you have fared if you were saddled with the same slop David was saddled with? Would it constrain you? Would you cry for mommy? Would you join a Jewish shepherds' gang and whine about Philistine oppression? Would you give your goals to the trolls and live on the sidelines of life with your dreams in check simply because others didn’t encourage po’ whittle you? Are you one of those pouty babies that need a red carpet rolled out for you or you’re not gonna play? Not David. Oh, heck no. Nothing of the aforementioned smack kept this kid down.

So, how did David play this wicked hand/golden opportunity when it was dealt to him? Check it out and follow simple shampoo instructions when faced with the ferocious; namely: lather, rinse and repeat what David did.

1. When it came to David’s family not digging him he didn’t turn into a brooding, multi-tatted, Gothic moaner who did death poetry slams about how he’d like to stab his parents with a butcher knife for skipping his 3rd Grade play.

Yep, even though David was rejected by those closest to him he knew that God hadn’t tossed him out with the trash and had the audacity to believe that even though others thought he was garbage. In God’s eyes, which were the only eyes that mattered to young David, he was “fearfully and wonderfully made.” Check it out in David’s own words in Psalm 139…

13 For you created my inmost being;
you knit me together in my mother’s womb.
14 I praise you because I am fearfully and wonderfully made;
your works are wonderful,
I know that full well.
15 My frame was not hidden from you
when I was made in the secret place,
when I was woven together in the depths of the earth.
16 Your eyes saw my unformed body;
all the days ordained for me were written in your book
before one of them came to be.
17 How precious to me are your thoughts, God!
How vast is the sum of them!
18 Were I to count them,
they would outnumber the grains of sand—
when I awake, I am still with you.


* Is that powerful or what? Please note David didn’t quote what his dumb brothers thought about him or his seedy conception.

2. David didn’t drone about his job even though it sucked worse than an airplane toilet. Matter of fact, David not only didn’t complain or give minimal effort but he was super contentious of Jesse’s critters (1 Sam.17:15,20) and he even jeopardized his life for his father’s flock (1 Sam.17:34-36).

In addition, instead of whining and complaining during work, he obviously milked a sucky experience and turned it into songs and revelation of how God relates to us… his dumb sheep. “The Lord is my shepherd, I shall not want,” (Ps.23:1).

You see homoslackiens, David did his work, his “inglorious work”, unto the Lord, not men. Chew on that nugget for a few hours, por favor.

Oh, and one more thing: when Samuel sought for a king to replace numb-nuts Saul he found David, the only arrow in Jesse’s quiver who was working. Think on that for a little while, Tinker Bell.

3. David didn’t let his age hold him back and neither should we, whether we’re young or old. It’s simple, folks: If God injects something into your spirit that’ll bless his heart, better our planet and scatter his enemies, then guess what? You’re the right age, no matter what your age. David understood this and so should you. Please notice: when David was faced with Goliath he didn’t say ‘’I'm too young,” but rather, “Who is this who defies the living God?” (1 Sam.17:26).

4. When Saul “the expert warrior” tried to saddle David with his “advanced weapons and armor”, weapons and armor that “made sense” to the “consultants” when tackling monstrosities, David would have none of it (1 Sam.17:38-40). Read this slowly: David was encumbered by their tools of the trade and relied on what he knew he could kick butt with, versus what they were selling him. Boom. Ballsy man stuff right there, hombre.

5. Finally, David encouraged himself in God. David filled the encouragement vacuum created by jealous brothers with the awesomeness of God and the sure knowledge that what he was doing was right and that God would back him up. He built his spirit up and remember … he had no Christian Facebook group and/or a loaded iPod filled with contemporary Christian rock to make him chipper and bold. He was a force of nature, in and of himself, via his relationship with God, when he descended as the bad-ass into the Valley Of Elah.

Take these little ditties and meditate on them as you face the giants in your life and in our nation in 2015 and refuse to stay marginalized and terrified in front of what confronts you in this coming year.

And lastly, please email this, share on Facebook and tweet this to folks who’re rowing against the tide of the establishment and clowns who try to keep them from slaying giants.

Cuomo Says He Won't Accept the FDA's Approval of a Coronavirus Vaccine
Bronson Stocking
Several Arrests Made, Felonies Charged in Texas Vote Harvesting Scheme
Ellie Bufkin
Two Polls That Shatter the Liberal Media's Propping Up of Joe Biden
Matt Vespa
Ballots in Pennsylvania Were Found in the Trash. They Were All Votes for Trump.
Katie Pavlich
'I'm Voting for My Family': Truck Driver Delivers Powerful Message of Success Under Trump
Ellie Bufkin
Reuters Tried to Claim the Louisville Riots Were Mostly Peaceful. They Were Not.
Julio Rosas