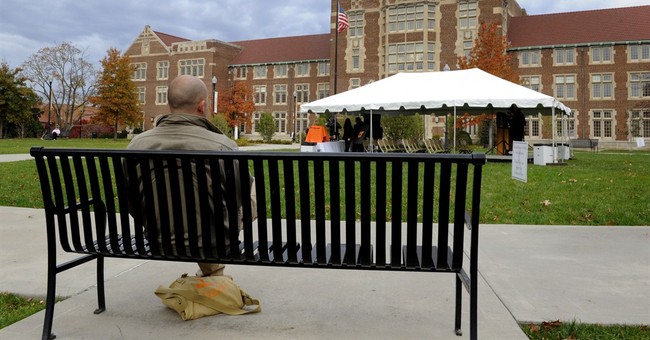 Hey, Dad. If you’re going to send your kid to a public school or a state run university, then you’ve got to teach your child not to just sit there in class, like a nice boy, and take whatever propaganda the “progressives” shove down their pie hole.

The Conservative/traditionalist is the rebel of our day. “The Man” and “The Machine” on campus to rage against is not stodgy traditionalism, but rank socialism and its moral and political vacuity. Meet the new boss — it’s not the same as the old boss.

For Dads who want their kids to make a dent on their campus for God and country, not only for their sake but for the following generations, I have seven things your charge must take on if they want to screw with the asinine screwballs at their school. To be an effective agent of rebellion have them do the following:

1. Get a sense of humor. Most of the liberal teachers and student activists are a screeching, nerve-grating, nasally bunch of emotional basket cases.

Therefore, conservative student, when you queue up to address your crowd, be pleasant, poke fun at yourself, remove the whine from your voice and use honed humor to humiliate the Left. Getting folks to laugh at your opponents and not being rabid about taking yourself so seriously helps get your point across.

2. Get creative. God bless technology. Conservative rebels, you have at your technological fingertips the wherewithal to go creatively crazy with the real possibility of a stack of people seeing and hearing you take on the Left’s propaganda peddlers via social media.

3. Get tough. One thing that drives me nuts about some wussies on the right is their bemoaning how they get attacked when they go public in the classroom with their sentiments. What did you think the Leftists were going to do, clap? Buy you candy? Look, not-so-sharp holder of traditional values, we’re in a very real culture war. The crap will hit the fan when you counter the liberal crud in the classroom. Embrace it. Suck it up. Get tough.

4. Get prayerful. Most folks on the ludicrous left who embrace what 21st century Democrats currently spew are admitted atheists. Seeing that they don’t believe in the God who is, I’m a guessin’ they are probably not down with the discipline of prayer. The traditionalist (usually) believes in the God of Scripture . . . the God who’s got a will and way that He’d like to see implemented on the planet. Therefore, start praying with faith and oomph for His will to be done on earth as it is in heaven (this includes your campus).

5. Get informed. Conservative contrarians, you’ve got to get the following books and read them:

Digest the above and, when appropriate, take some of the factoids found within these devastating tomes and share them with your prof during class and your buddies in the dorm; and watch their blood pressure spike.

6. Get speakers to your campus who’ll fire up your base. Duh.

7. Get sharp looking. Most Leftists on campus have a monopoly on ugly. They are neither pleasing to the ear nor eye. Do not follow their lead, young conservative. If they want to look slovenly, unshorn, tie-dyed and multi-pierced, let ‘em. You, however, should run in the opposite direction.

Lastly and seriously, Dad, if America continues to: diss God, follow cultural coarsening zombies, whiz on traditional values, weaken in our chutzpah, stop spitting out babies and continues to say “muy bien” to this insane illegal immigration invasion, then as a super power we will be in more trouble than a naïve, giggly, good-looking, drunk girl, or guy, at a Dennis Rodman keg party.

No civilization has lasted long as King of the Hill when there was a death of faith, a degeneration of morals, contempt for traditional values, a reliance upon big government, a collapse of culture, a paralysis of the will, a decline in its native born population, and foreign invasion that wasn’t resisted. Google it if you don’t believe me, as the aforementioned is well known 411 regarding nations that have Gary Busey-ed their being into cheesy tourist spots.

Look folks, here’s the deal, if we forego the foundations upon which our country was built and start winging it with “progressive” principles instead of our old school traditional values, substituting our original blueprint for some socialist wizard’s ideas for a better mañana, then we officially put ourselves in line for historical butt kicking. And we have plenty of enemies hoping that we will blissfully blow off the very nitty-gritty that got us to this place of global greatness.

I believe young people who boldly embrace our nation’s founding docs and who’ll respectfully take on those who denigrate them in the classroom are major players in this momentary stay of our nation's execution.