Miss California Is Braver Than Some Pastors 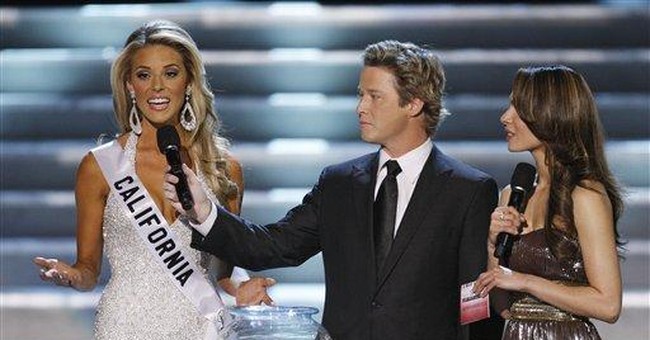 I never thought that I would mention Perez Hilton in one of my columns, much less publically thank him for being an obnoxious, culturally-toxic chunky gay man, but thank you Perez—or whatever the heck your name is.

Why do I thank him?

Well, I thank him because his inappropriate, gay agenda-laden beauty queen litmus test regarding homosexuals getting hitched-up afforded Miss California the opportunity to stand up for the biblical definition of marriage in a puerile, politically correct, crap-addled culture, that’s why.

I tip my hat to Miss Carrie Prejean. She didn’t fold like a cheap lawn chair to the emotionally-charged inquisition.

It’s refreshing to see conviction nowadays. You remember conviction, don’t ‘cha? Kudos for that graceful display of moxie, girlfriend. Hopefully some pastors, especially you well-known “major” ministers, who have shied away from standing publically with the . . . uh . . . Bible . . . will, by her example, grow a pair and come back to quoting God on the topic instead of Tyra.

Whether you’re a Christian or not, if you don’t think Adam and Steve is a viable alternative to Adam and Eve, you should not feel the least bit of shame to say so in public without equivocation or apologies.

C’mon, people. You can be just as bold for your time honored, road tested, God blessed and ordained opinion on matrimony as the foul toad known as Perez can in his take on marital bliss, can’t you?

My hope and prayer is that Prejean’s pattern of answering the wrong question with the culturally wrong—yet right—answer will embolden millions of young and old folks to gracefully and unashamedly speak up and out for that which is right and true without batting an eye.

To be sure, you will be called a homophobe or worse that Hilton called Carrie, but who cares? God told us we’d take heat for declaring His ways in a warped world. And I expect it to get worse before it gets any better. You culture warriors better put on a cup because it is gonna get Perez Hilton ugly.

Oh, and by the way, wasn’t it interesting to see how elegantly Miss CA handled this ordeal in contrast to PH? Hilton is a real winner, ain’t he? What a way to make us heteros sympathetic to gay angst, Perez. What a moron. If I were gay I’d disown Hilton for that display; he’s giving gay a bad name.

Lastly, what in the heck is Perez doing judging gorgeous women anyway? You have your queens. Leave ours the hell alone. Shouldn’t you be on the front row of the Idol finals shoutin’ up Adam Lambert or something? Get a life, dude.