Donna Jackson
|
Posted: Jun 16, 2020 12:01 AM
Share   Tweet
The opinions expressed by columnists are their own and do not necessarily represent the views of Townhall.com. 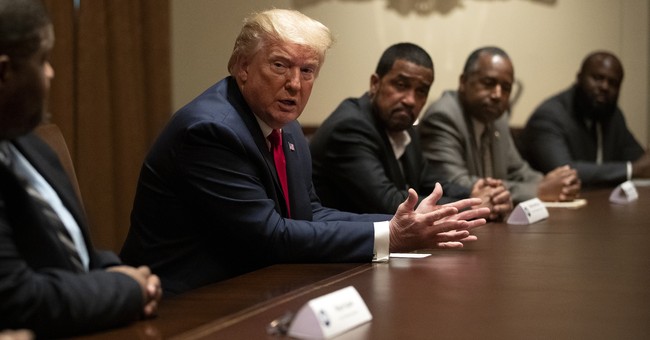 While I don’t often find myself agreeing with Jesse Jackson, I applaud his support of a pipeline to bring affordable natural gas to the predominantly minority and low-income farming community of Pembroke Township, Illinois.

As a black conservative who opposes Jackson on issues from racial preferences to economic policy to protecting our ballots from needless risks under the guise of voting rights, I think he’s courageous for breaking with the liberal establishment and radical environmentalists to help this struggling community benefit from affordable energy.

Rising above the political fringe, Jackson said about hooking up the rural community south of Chicago to natural gas: “This is our work – fighting poverty and connecting people.”

President Donald Trump has prioritized both increasing the supply of domestic energy and building out pipelines and other infrastructure to deliver it. Doing so creates jobs and ensures access to the most affordable energy available. This is especially important for low-income households where high energy bills raise the prospect of “energy poverty” – having to forego even the most basic necessities such as food and new clothing to keep lights on and homes warm.

With around 70% of black households having just a single parent, the affordable energy issue should be important to the reverend and the president.

But this pro-energy/pro-people agenda is criticized by environmentalists and their liberal allies. They seem to think no price is too high when it comes to fighting “climate change.” They are happy to block projects involving fossil fuels like natural gas, oil and coal – even if it is to the detriment of black Americans who have supported them politically.

Pembroke Township is far from alone. There are many minority and low-income communities that would benefit from affordable fossil fuel energy. Yet the necessary infrastructure to provide them with reliable, abundant and cheap fuel is often blocked by activists – sometimes under the pretenses of “protecting” them!

In some cases – like the proposed Atlantic Coast Pipeline (ACP) that would run from West Virginia through Virginia and into North Carolina – critics have effectively prioritized scenic trails for affluent hikers over jobs and upward mobility for struggling black families. Even liberal Supreme Court Justice Ruth Bader Ginsburg sided with the ACP in a recent decision that gave the U.S. Forest Service the authority to allow the ACP to run underneath the Appalachian Trail.

But troubles remain for the ACP in Buckingham County, Virginia. Environmentalists have recruited local black community leaders to help block a proposed ACP pumping station based on “environmental justice” claims. I imagine that, if the ACP is killed and those same black leaders later go looking for help for their community, their environmentalist “friends” will be long gone.

That’s why Jackson’s voice in Pembroke Township is so important. While supporting an alternative energy approach, he also thinks it must be balanced against the needs of people – especially when natural gas is the most affordable option. “When we move to another form of energy, that’s fine by me, I support that,” he said, “but – in the meantime – you cannot put the black farmers on hold until that day comes.”

Even Al Sharpton – whom I agree with less than Jackson – supports natural gas, saying that “people in communities of color should not pay the brunt of suffering through cold winters.”

Yet some on the left would apparently rather dictate to black people than listen to them.

Marc Morial, president of the National Urban League, gets to the root of the problem. He said liberals pay too much attention to environmental activists while taking the black community for granted. “People are debating these issues in some instances without consultation with the leaders of the African-American communities and neighborhoods affected by these issues,” he said.

Not in our name. Not when the stakes are our economic survival.

Donna Jackson is a member of the Project 21 black leadership network.